This post is about fly rod vs spinning rod. I covers he differences in presentation, casting, and uses for spinning and fly rods.

Modern developments have greatly changed the debate between fly rod vs spinning rod. Many lines have been blurred between the two. There are still differences, of course.

I’ve fished for most of my life and fly fished for the last 10 years, spending countless hours with both tactics. I’ve also spent a lot of time pushing the boundaries of each method.

The post will cover the differences, similarities, and capabilities of both fly tackle and spinning tackle. It will also cover how the distinctions between the two have become more and more blurred in recent years.

What Is the Difference Between a Fly Rod and Spinning Rod?

The largest distinction between a fly rod and spinning rod is what each was made to cast. A fly rod is made to cast a line, while the line carries the fly with it. 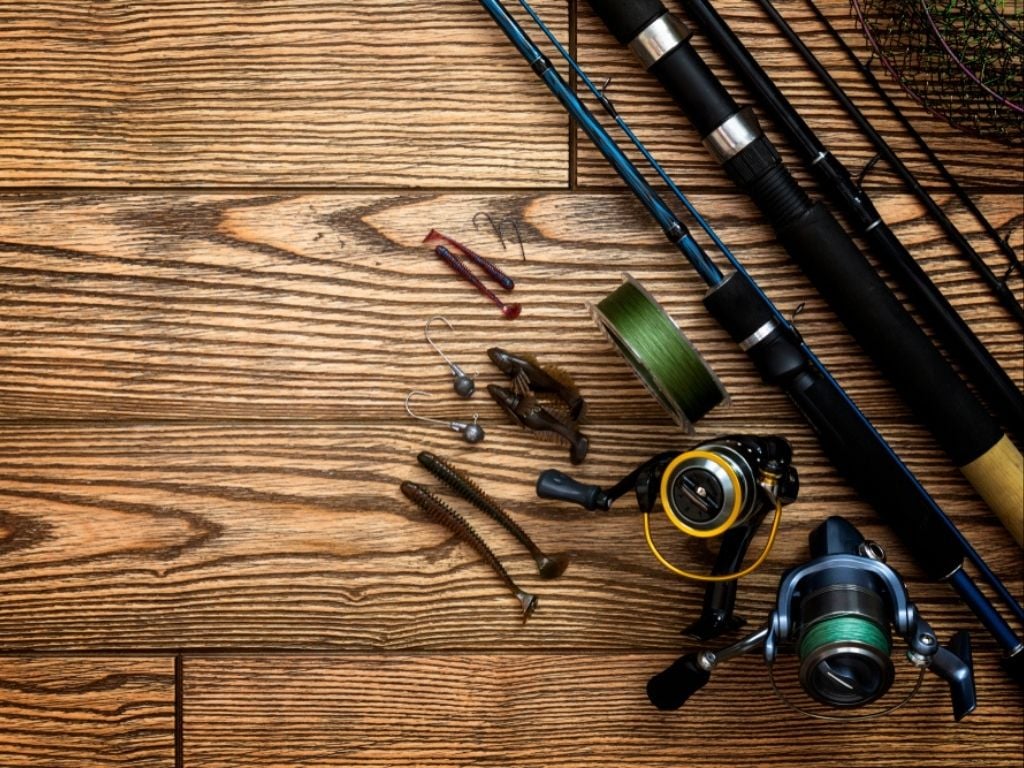 A spinning rod is made to cast a lure, which carries the line along behind it.

What Is a Fly Rod?

A fly rod is designed to cast a line rather than a lure. Although not every fishing method performed on fly rods today follows that principle, this is generally how a fly rod works. 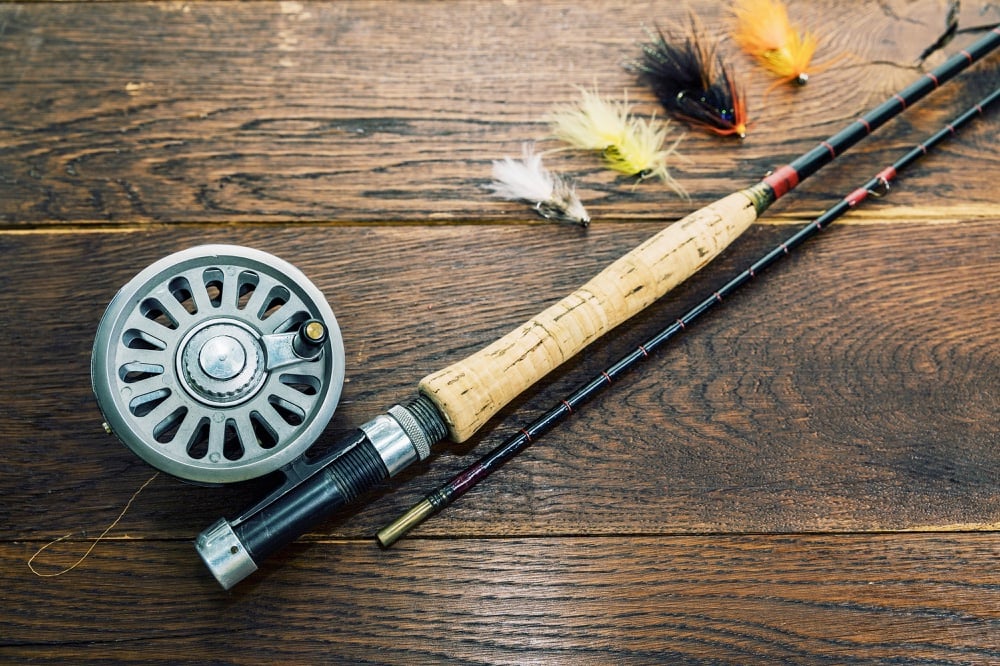 The weight of the line is cast and the fly is carried to its destination by that, not by its own mass.

What Is a Spinning Rod?

A spinning rod is a fishing rod designed to cast a weighted lure. The weight of the lure, slung in an arc to its target by the caster, drags the line off the reel behind it. 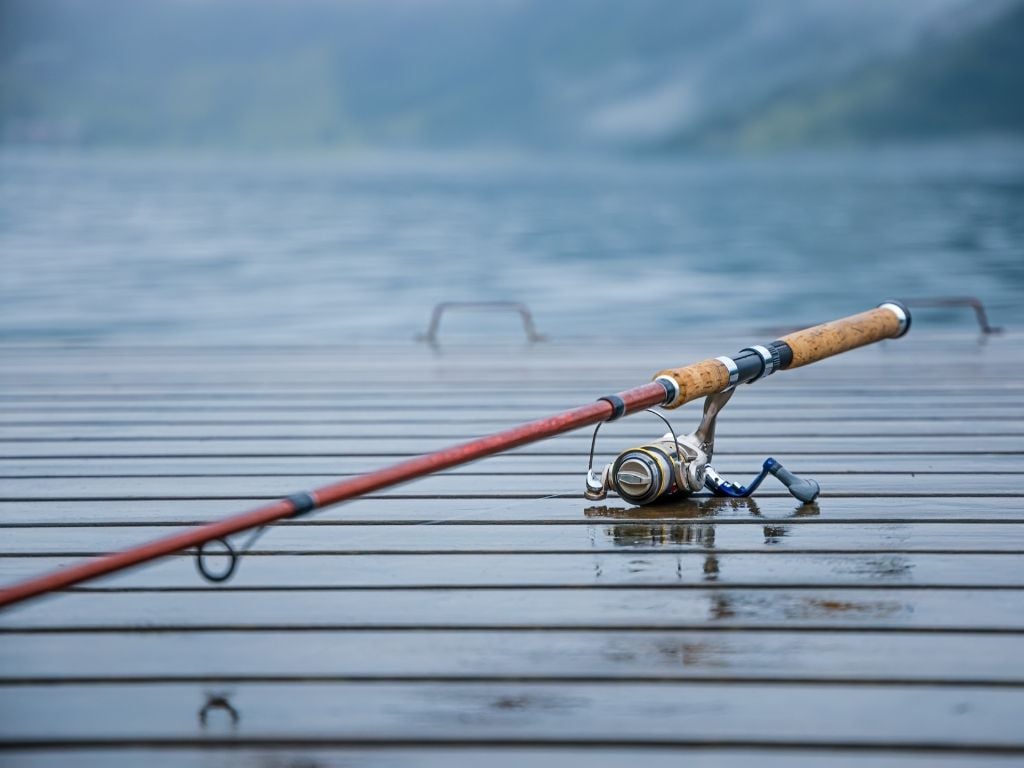 The line may be braid or monofilament, but the weight of the line itself makes little difference in the act of casting.

The most important thing to keep in mind when spin casting is that you’re casting the weight of the lure. When spin casting, the rod moves in an arc and the lure sails to its target in an arc. 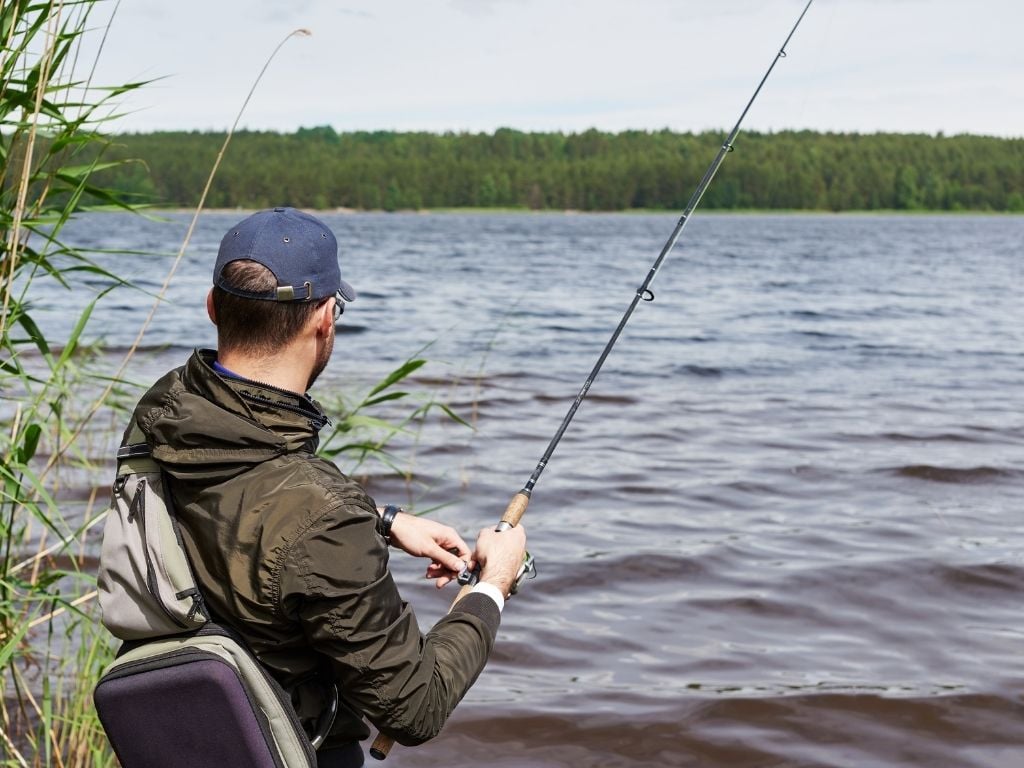 The most important aspect in fly casting is that you cast the line, not the fly. The rod travels in a straight line for most casts and is not only cast forward, but back-cast as well.

Traditionally, fly fishing flies are artificial imitations of insects. This definition has expanded to include larval insects, fish, and even birds, mammals, and amphibians. Feathers, hair, or synthetic materials can be used for tying flies. 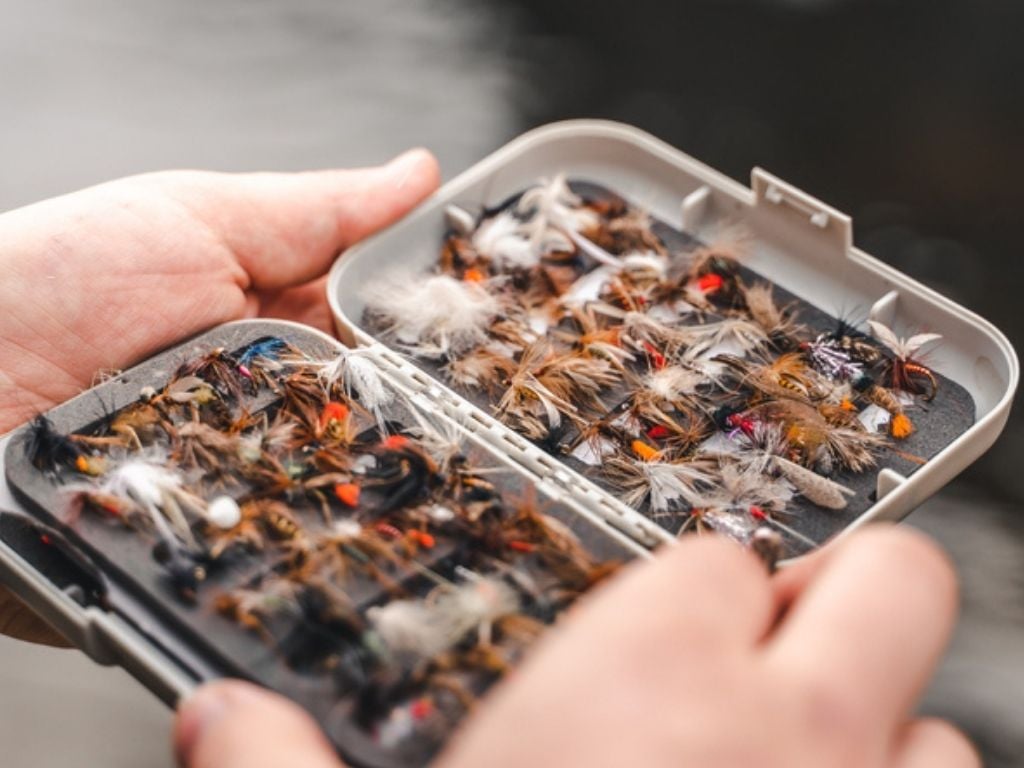 A lure is any artificial bait designed to attract a fish. By this definition every fly is a lure. However, not every lure is a fly. Many are best fished as spinning rod lures.

Many soft plastic lures are scented. Scenting flies is often not considered “fly fishing,” even if the scent is artificial.

The IGFA (International Game Fishing Association) forbids the use of scent in any fly used to catch a fish being submitted for a record. Adding any other lure or bait not also traditionally considered a fly is also prohibited for record submissions. This should generally be considered the standard for what counts as a fly.

Only a fly rod can effectively cast a fly line. Loading a spinning reel with a fly line and expecting to cast a bass jig with it would be silly. The diameter and mass is far too great for use on a spinning outfit. Monofilament, however, can be cast with both a fly rod and a spinning rod. 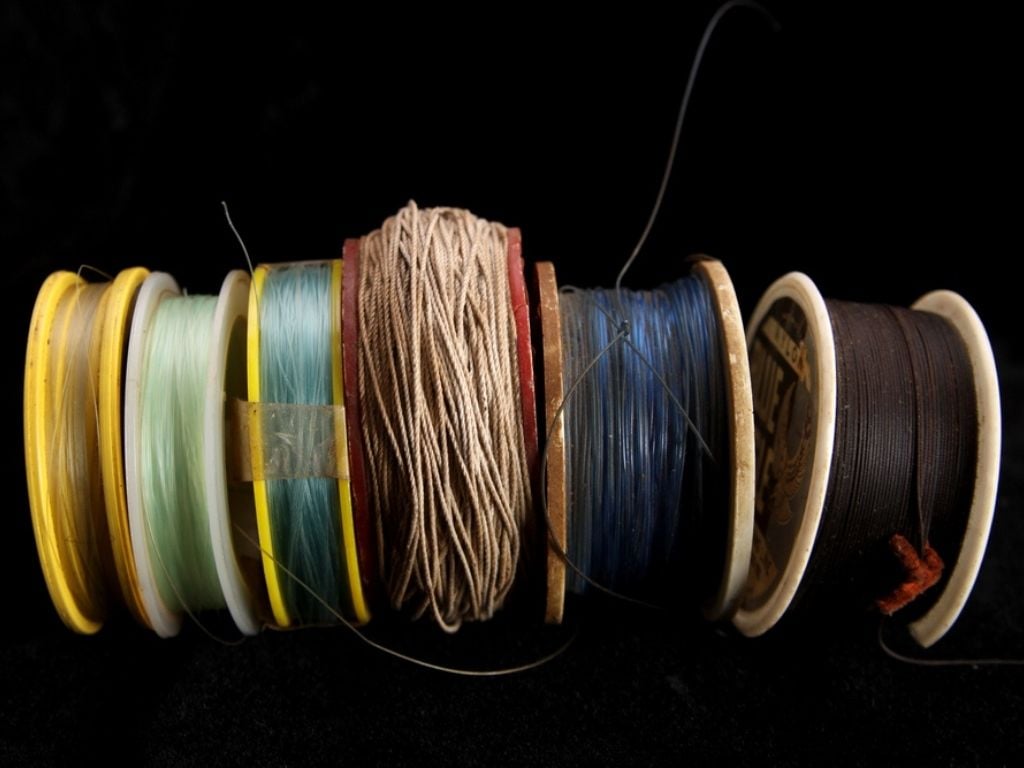 Many modern nymphing tactics employ the use of monofilament leaders long enough that the fly line never leaves the reel. Joe Humphreys wrote about using flat monofilament lines to fish nymphs and streamers in his book Trout Tactics. The method is being employed even more now than it was at that time.

In some cases, fishing a mono-rig with a fly rod means the weight of the fly is actually what is being cast. This makes it somewhat controversial. In some states, leaders over a certain length aren’t legal in fly fishing-only waters. So there is certainly debate as to whether this is fly fishing.

While the fly line is the thickest diameter fishing line, braid is the finest. Braided line can be used as backing on a fly outfit, but it can’t be cast with a fly rod. However, we often consider braids to be the best line to use with spinning rods.

The fine diameter and smooth texture of braid means you can fit more of it on a reel. These factors also reduce friction in both the reel and guides, making it possible to cast longer distances. A heavy lure, cast with a high quality rod and braided line, can reach a target much farther than the best fly casters can hope to reach.

The Difference in Presentation

There were once far more differences in presentation between spinning rod vs fly rod than there are today. It’s now possible to present flies in deeper, faster moving water with heavy sinking fly lines and weighted streamers. 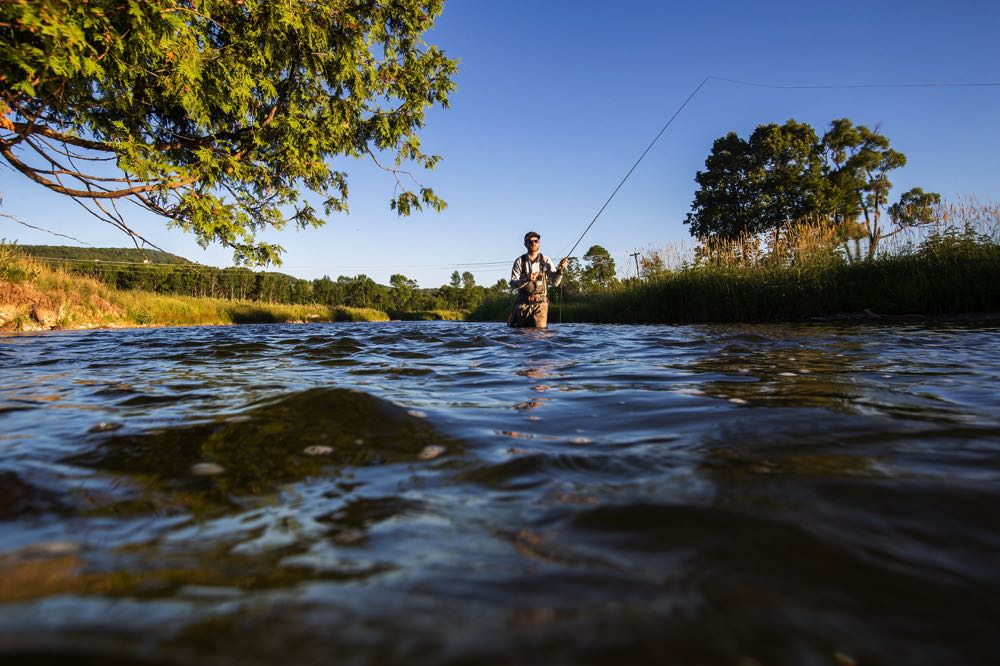 Creative fly designers are now building streamers that exceed a foot in length, further bridging the gap between spinning and fly casting.

It’s still true, however, that you simply can’t present a light, small presentation at a distance with a spinning rod. That’s where a fly rod excels. Conversely, spinning rods excel at presenting heavy lures at a distance.

There are also presentation differences allowed by lures that aren’t allowed by flies. It’s possible to get a very large lure to walk back and forth, a presentation called walking the dog. Even though some of us are trying, fly tiers have not yet succeeded in making a large and castable fly that has this erratic action.

Conversely, it’s impossible to create a lure to cast on a spinning reel that imitates a small floating insect in any way that will fool most fish feeding on such a food source. Imagine trying to make even a size 10 caddis imitation heavy enough to cast with a spinning rod that will land gently and float. That’s impossible in itself, let alone something size 22 or smaller!

Spinning setups, especially those with braid, have much more ability to reach depths more than 20 feet. When the presentation gets that far down in the water column, it’ll also be easier to detect strikes than it would be with a fly rod.

In some cases, the loud impact of a lure cast with a spinning rod spooks fish. One such case is when flats fishing. Of course, it’s possible to cast beyond the target fish and then reel in. However, in most cases a fly rod is a better presentation tool in this situation. 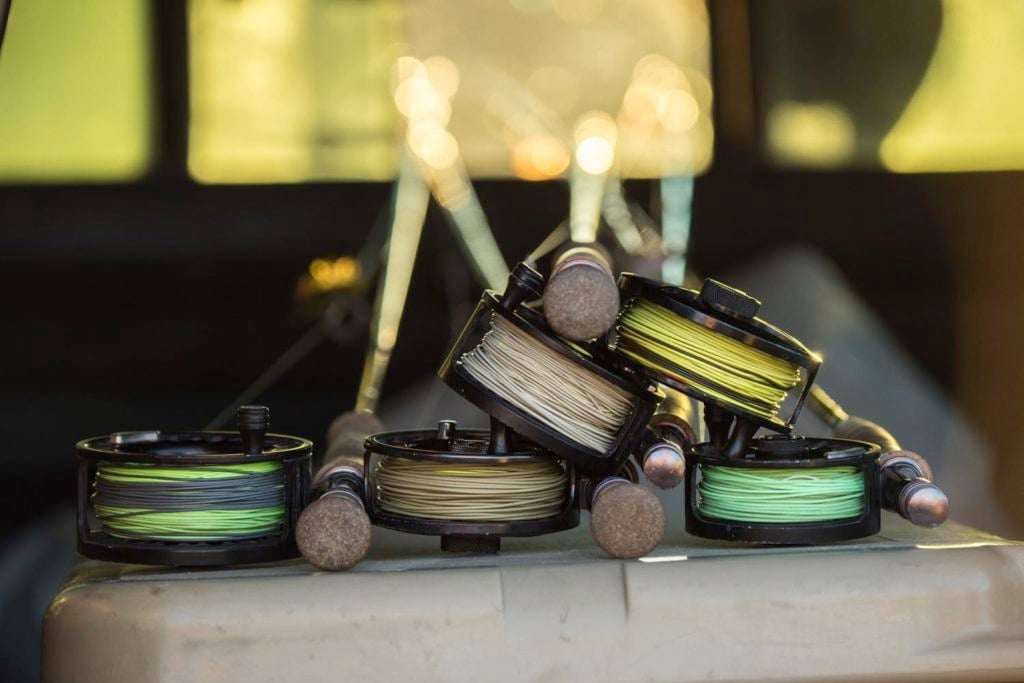 Spool diameter determines the retrieve rate of a fly reel as well. However, almost all fly reels have a 1:1 retrieve. One turn of the reel handle means one turn of line on the reel.

Simply put, this means it takes less energy for a spin caster to retrieve a lure rapidly than it does a fly angler.

When to Use a Spinning Rod

The short answer is, when you want to. Spinning rods are useful for most species of fish in a wide range of conditions.

However, they’re certainly the best choice when you need to present something with a lot of weight. They’re also ideal for fishing water depths of more than 35 feet and shallower than 100 feet. Of course, if you want to use live bait, you’ll get scoffed at much less if you do so with a spinning rod. Fly fishers are odd like that.

When to Use a Fly Rod

As with the spinning rod, you should use a fly rod whenever you want to. I’ve even used a fly rod to catch cod on a drop shot rig in 16 feet of water, though it was certainly not the best way of doing that.

Fly rods excel at casting light and accurately at long distances. They are fantastic for finesse fishing.

Fly rods especially struggle in water deeper than 40 feet, especially with strong current. They can’t cast anything heavy. However, tying big flies light and sparse enough to cast is possible.

When to Use Something Else Entirely

Neither spinning rods nor fly rods are always the best option. Often, when fishing in deep ocean water, a slow pitch jigging rod is best. To cast heavy lures accurately, a bait casting rod is a great choice. The question isn’t always fly rod vs spinning rod; sometimes it’s much more complex than that.

How to Fish a Fly Rod vs Spinning Rod

Neither method is actually harder than the other. Fly rodders often like to believe what they are doing is more complex and harder to learn than any other fishing method. I disagree. It takes every bit as much time and effort to learn how to spin cast well as it does to fly cast well. 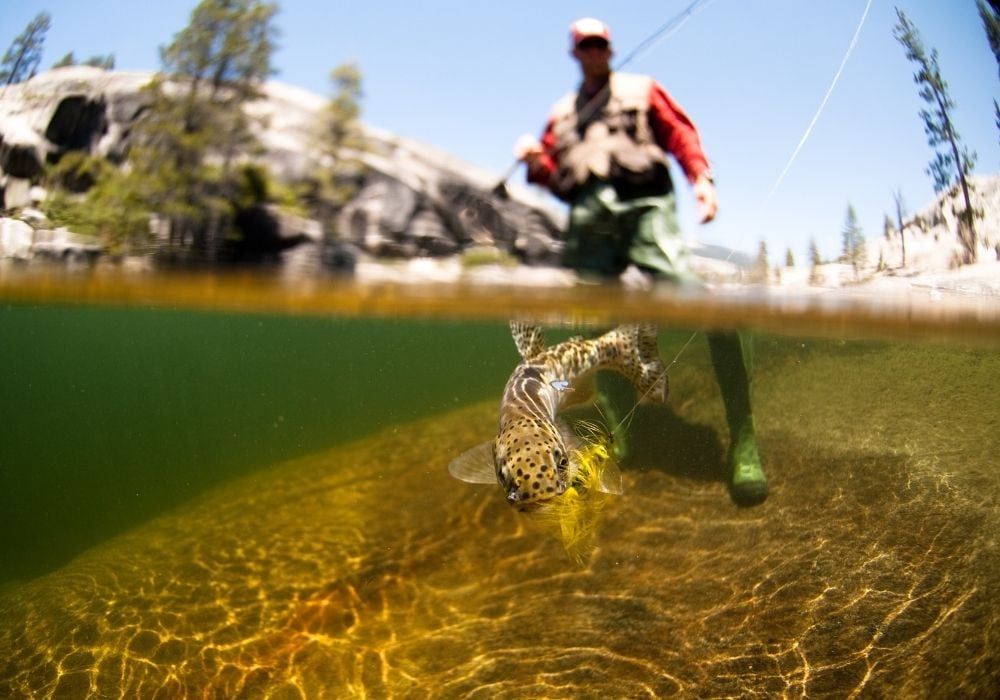 By the time I was pretty good at fly casting, I realized it would have been just as hard to reach a similar level of skill with a spinning reel. In fact, I never really did get that good at spin casting.

Now You Know the Differences Between a Fly Rod & Spinning Rod

Hopefully this article has been helpful for understanding the difference between fly rods and spinning rods. Although there are certainly many developments making fly fishing more like spin fishing these days, there are still enough distinctions to separate one from the other.

Rowan Lytle
Rowan Lytle has been fishing ever since he can remember and has been an avid fly fisher since he was 14 years old. Over time his interest in fly fishing turned from a hobby to passion to a full-blown obsession. He fishes between 250 and 320 day each year and has caught over 160 different fish species on the fly.

A list of the best fly rods for trout including the best weights for trout rods and important features to look out for in the best trout fly rods.
Dallas Hudgens
January 29, 2023

Pro angler's guide to the best wading boots for fly fishing including budget wading boots, features to look out for, best materials, ones to avoid & more.
Nick Wharton
January 26, 2023

Find the best fish finders in this complete guide which lists all the best finders, plus top brands & important features to look out for!
Dallas Hudgens
January 26, 2023
CONTACT US PRIVACY ABOUT US BLOG SITEMAP