Read this review before you purchase an Orvis Hydros fly reel. It’ll help you in your decision making process. Friends, buddies, pals, how are you doing? Welcome back to another review.

I’m going to talk to you today about the Hydros reel from Orvis.

Now, I’ve had this Hydros III for quite a while, so I’ve got a pretty good idea of what it’s all about. The guys from Into Fly Fishing asked me to have a chat with you about it. So, that’s pretty much what we’re doing today.

I didn’t fish the previous model of the Hydros III, so I don’t know how much lighter this is than that, but apparently it’s quite a bit lighter. They’ve done some tinkering with the drag knob, but again I have nothing to compare that to.

Apparently it’s got a matte type 2 anodized finish. I don’t really know what that means, but it does look cool. And that’s a big thing. I like my gear to look cool. I like color. I like this blue.

If you fish this blue on an overcast, dreary day, this thing just glows. It’s so satisfying to use. I love it.

I’ve seen it in a really cool green, and in a lemony color too. I don’t have those reels, but I have seen them. I fished a green one, and it was just as cool.

I’m a big fan of color, anything where you can get a little bit of pop. It brings me joy. It makes me happy. I like it.

Everything’s just gray, silver, black, and it’s kind of boring. So anytime I can get a bit of color into my gear, I’m all about it.

Now, let’s talk about the drag system. You can go from no drag to full drag in one big turn. It doesn’t really bother me whether or not I can do this in one turn, one and a half turns, two turns, or whatever, but what I do like about it and what I do think is important is how smooth the drag is.

Once you’ve got the drag engaged and you actually start to pull the line, there’s pretty much no startup inertia. It’s just smooth and starts to give.

That’s super important when it comes to not busting off fish. If you do need to fine tune the drag during the fight, it’s super easy and smooth, and you can make little adjustments really easily.

While we’re on the subject of drag, this reel is a beast. I’ve landed some pretty big fish on this particular reel. The drag dealt with all of those fish, zero problem, and there was plenty more to give if I needed to. You can have total confidence that it’s going to deal with whatever fish you come across.

Orvis says that the Hydros III is good for 5 to 7-weight lines. I’d say it’s maybe a little bit big for my 5-weight preferences. I’d probably go for the Hydros II if I was going to fish a 5-weight, but on a 6-weight the III does balance it quite nicely.

I imagine it would be good on a 7-weight rod as well, but on a 5-weight I feel like it might be a little bit heavier, put it out of balance, and be a little bit clunky. It’s quite a large arbor, so the line pickup is pretty quick and effective.

This thing is built like a tank. I’m actually pretty rough with my gear. It’s something I’m trying to be better about and not be so rough, but I have a habit of dropping things, throwing things, just generally being clumsy and quite heavy-handed with my gear.

I don’t think you can break it. I’ve chipped some paint off and bits and pieces. Just a minute ago I dropped it onto concrete. It just bounced and rolled. I’ve done that before, and I’ve completely bent the frame on cheaper reels. So this thing will take some abuse.

That’s always good. If you do fall over, or you drop your gear, or you smack it on a rock, you’re not going to ruin your reel.

Another thing I really like about these is that they’re very easy to take apart. It’s just one little switch that you pull across to release it. It pops back together very easily, so if you do need to get that spool off at any point while you’re on the water, it’s super easy and super quick.

The Orvis Hydros III has a middle-of-the-range kind of price for Orvis reels. It’s not the cheapest, and it’s not the most expensive. It’s kind of in the middle somewhere.

My days of buying cheap stuff to try and save money are well over. I learned a long time ago that you really do get what you pay for.

It will be worth saving your pennies and getting something a little bit better. They will last you. It will last you longer than you need a reel to last you.

I’ve also got the Hydros V, which is two sizes bigger than the III, obviously. I’ve got the V for saltwater fishing, for kingfish on the flats.

I paired this with my 9-weight Helios III, and it’s a beast. It’s so nice to use. It’s light, like they say it is. It’s really light.

The drag is meaty. I mean, it’s spicy. I’ve landed some big kingfish on this, and they’re strong fish. This thing has dealt with them beautifully. It’s grunty.

The sealed drag is great, obviously because it’s saltwater. I often forget to wash my gear down after I’ve been in the salt. It’s bad, I know, but there’ve been no issues with the drag so far.

So like I say, the Hydros V goes really well with my 9-weight. It would be great with a 10-weight.

It’s got a quite wide arbor, so you can get plenty of backing on there, which is handy, especially for saltwater stuff.

I use Scientific Anglers Gel Spun 50 pound backing. You can get a ton of that on there, so if you need it, it’s there, and with plenty of room for a fly line.

And like I say, it goes super well with a 9-weight. It would be great with a 10-weight. You could probably even use it with an 8-weight, to be honest. It might be a bit heavy for an 8-weight, but you could get away with it.

The Hydros Reels I Use

The two that I use are the III for my freshwater stuff and the V for saltwater. 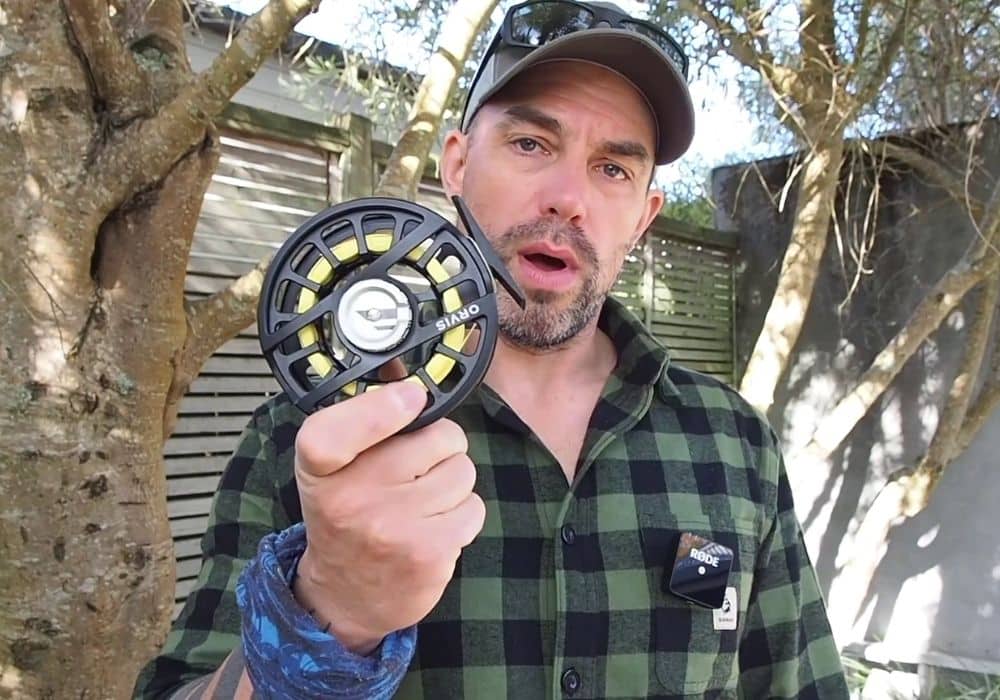 I use the V for my saltwater stuff, with a 9-weight or 10-weight. What a match.

It’s everything you want from a reel. And I like the colors.

I fish a lot, more than most to be fair, and I’ve got a lot of confidence in these. I would happily fish one of these any day of the week.

Not only do they look cool, but they do what they’re supposed to do. That’s really all you want from a reel.

If you go and get one, drop a comment in the comment section below. Tell us what you think.

Have a great week everybody. I hope you get out for a fish. Peace.

This buyer's guide will show you which fly reel is best for you based on all of the most important factors like price, weight, drag, arbor-size and material.
Nick Wharton
September 22, 2022
CONTACT US PRIVACY ABOUT US BLOG SITEMAP