In this post and video we show you how to tie a San Juan Worm fly and everything you need to tie it including tools & materials.

Home , Flies , How to Tie a San Juan Worm (Step-By-Step with Video)

In this guide, I’ll show you how to tie what’s probably the easiest nymph of them all, the San Juan Worm. What’s the best thing about this fly? It’s a fish catching machine. All it takes is two basic materials and a hook.

I’ve been using this fly for most of my fly fishing career. I’ve used it to catch trout, bass, carp, and even some saltwater reef species. You’ll always find a couple of San Juan Worms in my box.

What Is a San Juan Worm?

The San Juan Worm is a quick and easy-to-tie nymph pattern. It only uses two materials: thread and a brightly colored red chenille. Many successful variations include a bead that makes the fly sink faster. 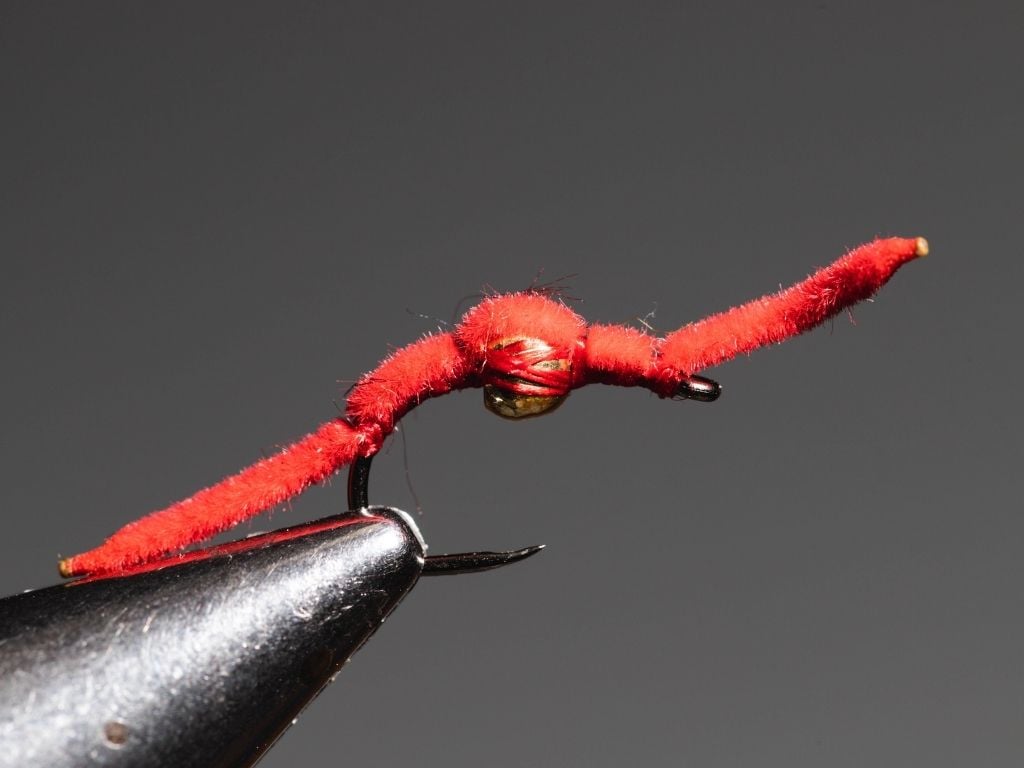 As you can clearly see by looking at the fly, the San Juan Worm imitates a red bloodworm. Trout and many other species go crazy for these flies. I’ve used it to catch brown trout, rainbow trout, yellowfish, bluegill, and carp. I’m sure that many other fish species would also find the fly irresistible.

Watch the How to Tie a San Juan Worm Video

How to Fish a San Juan Worm

I use the San Juan Worm on both still waters and rivers. On a river, I find that it’s crucial to select the correct weight according to the current and depth the fish are feeding in. For this reason, I carry a range of sizes, all tied with different tungsten bead sizes.

For very slow-moving water or still waters, I carry a couple of unweighted versions.

You can use the San Juan Worm in any nymph rig or dry and dropper rig. The latter is one of my favorites for targeting shallow-water yellowfish in South Africa. 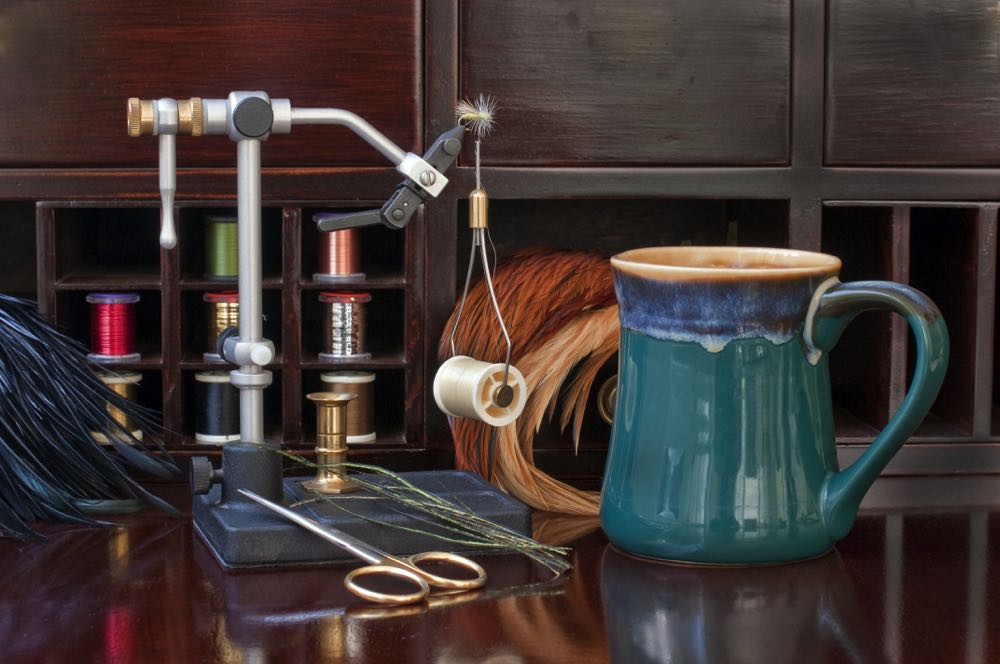 A robust curved shank hook works best. It gives the fly a natural look and protects the hook point when it’s fished on the bottom of a river. Some of my favorite hooks to use for a San Juan Worm are:

There are various ways to make the fly sink faster. For a slight addition of weight to help the fly break through the surface film better, a couple of wraps of lead wire will suffice. This technique works well for stillwater flies or San Juan Worms used in slow-moving water.

If you’re going to use the San Juan Worm in a river, chances are you’ll want to get the fly down quickly. The best way to do this is by adding a bead to the fly. Depending on how much weight you want to add, you may wish to vary the bead’s material or physical size.

I prefer tungsten beads as they give the fly the maximum weight. 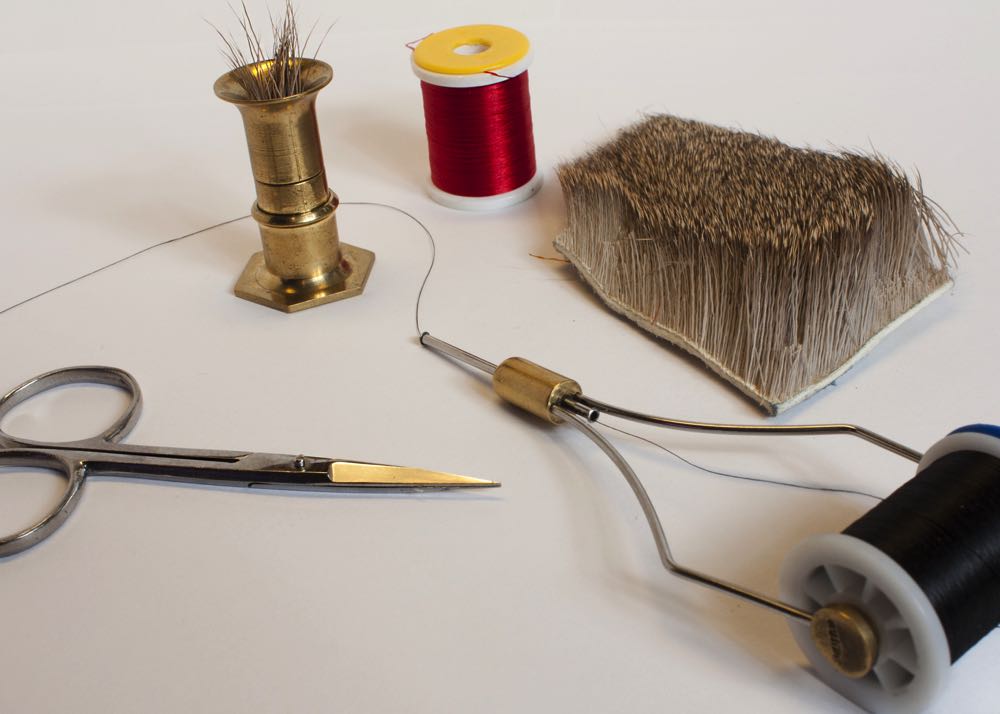 So, now that we’ve gone through all the tools and materials you need to tie a San Juan Worm, let’s tie one.

Step 1: Slide a Bead on the Hook 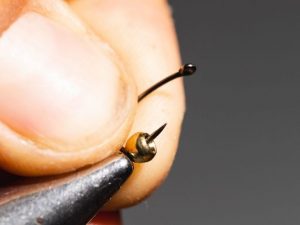 Hold the hook in one hand, leaving the hook point exposed. A countersunk bead has one small hole on one side and a larger hole on the opposite end.

Slide the small hole over the hook point first until it hits the hook eye.

Step 2: Place the Hook in the Vise 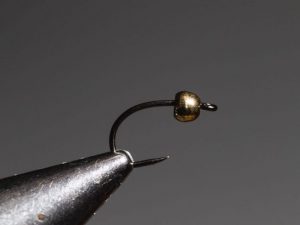 Place the back of the hook between the jaws of a vise and close the cam. The hook point and barb should be exposed, and the rest of the hook should be accessible to allow for comfortable tying.

Test to ensure the hook is adequately seated to prevent frustration later on. 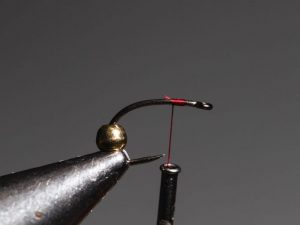 Slide the bead halfway down the hook shank. Hold the thread’s tip with your non-tying hand and lay the thread over the hook behind the eye.

Make 4-5 wraps and then back over the thread to lock it in place. Trim off the excess tag end. 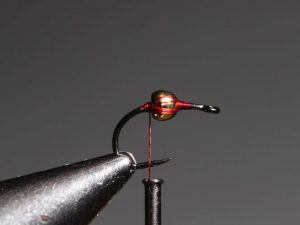 I prefer the bead on a San Juan Worm to be in the middle of the shank. Place the bead in position. Wrap the thread rearwards and form a thread dam in front of the bead to prevent it from running forward.

Now, cross the thread to the back of the bead and do the same on this side. Cross over a couple of times, followed by a few wraps to prevent the bead from spinning. Leave the thread hanging behind the bead. 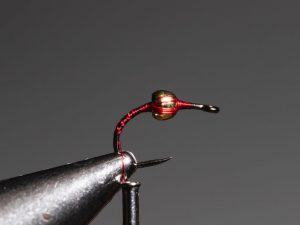 Open the thread by spinning it counterclockwise. Wrap the thread, with touching turns, rearwards until you get to the most rearward point on the hook.

Step 6: Tie In the Chenille 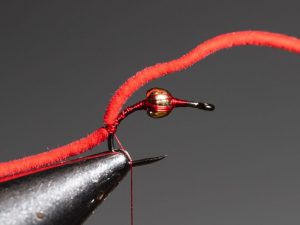 Cut 1.5” of the micro chenille from the holder, and place it on top of the hook shank. The section hanging off the back should be roughly 1/2” long.

Tie the chenille in with a couple of pinch wraps where you left the thread in the previous step.

Step 7: Secure the Chenille Behind the Bead 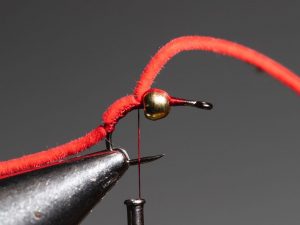 Advance the thread forward until you get to the back of the bead. Fold the forward-facing section of the chenille over and secure it with thread.

Make a good couple of wraps over the material to prevent it from twisting out of position later.

Step 8: Secure the Chenille in Front of the Bead 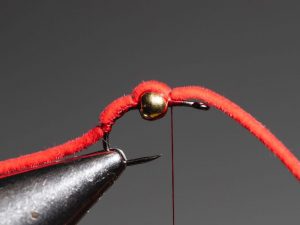 Lift the material and make several licking wraps in front of the chenille to prevent it from twisting. 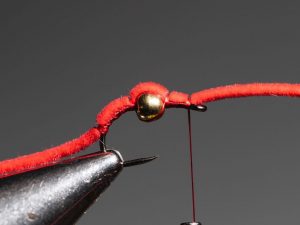 Advance the thread forward, leaving a small gap behind the hook eye. Fold the chenille forward over the top of the shank and secure it in place.

The remaining section of the chenille facing forward should be the same as the length at the back.

Step 10: Tie Off the Thread 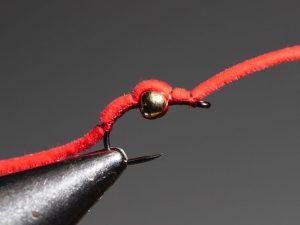 Pull the front section of the chenille back and create a neat head for the fly between the hook eye and the last chenille securing point.

Whip finish the fly twice and cut off the thread. 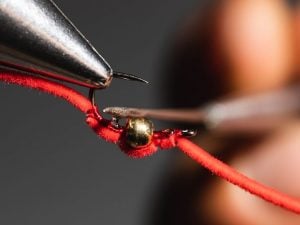 Put some Sally Hansen Hard As Nails on a bodkin and seal all the exposed tying thread. This process ensures a durable fly.

That’s How to Tie a San Juan Worm

Many fly fishing purists shrug off the San Juan Worm, saying that it’s nothing other than a Squirmy Wormy. Although there might be some similarity between these two, the San Juan Worm is an excellent worm imitation. It shows that a fly doesn’t need to be hard to tie for it to produce the goods.

If you found this article with video helpful, please share it with your friends and fellow anglers. I’d love to hear what your thoughts are on the San Juan Worm and what fish you’ve caught with it. 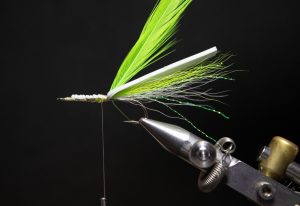 In this post and video we show you how to tie a Gurgler fly and everything you need to tie it including tools & materials. 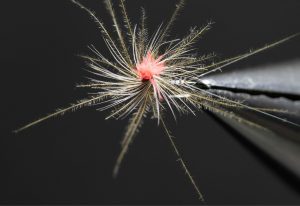 In this post and video we show you how to tie the Ultimate Parachute Adams fly and everything you need to tie it including tools & materials. 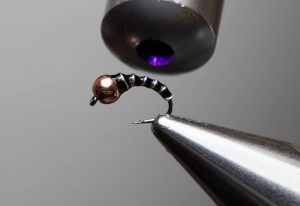 How to Tie the Zebra Midge (Step-by-Step with Video)

In this post and video we show you how to tie the Zebra Midge fly and everything you need to tie it including tools & materials.