How To Tie a Soft Hackle (Step-By-Step With Video)

A fly tying expert walks you through the steps to easily tie a soft hackle fly including a video tutorial and photo instructions for each step.

Home , Fly Tying , How To Tie a Soft Hackle (Step-By-Step With Video)

The Soft Hackle is a great fly to learn how to tie. For beginners, it’s incredibly easy, uses minimal material, and teaches you a basic hackle technique. The Soft Hackle is a fantastic all-rounder fly that can be used on many different fish species. These include all trout species, bass, and grayling.

Watch The How To Tie a Soft Hackle Video

What Is a Soft Hackle?

The soft hackle is a traditional fly that can be traced back over 150 years. It originates from the British Islands and is a successful fly all over the world. It is incredibly easy to tie and uses minimal material. 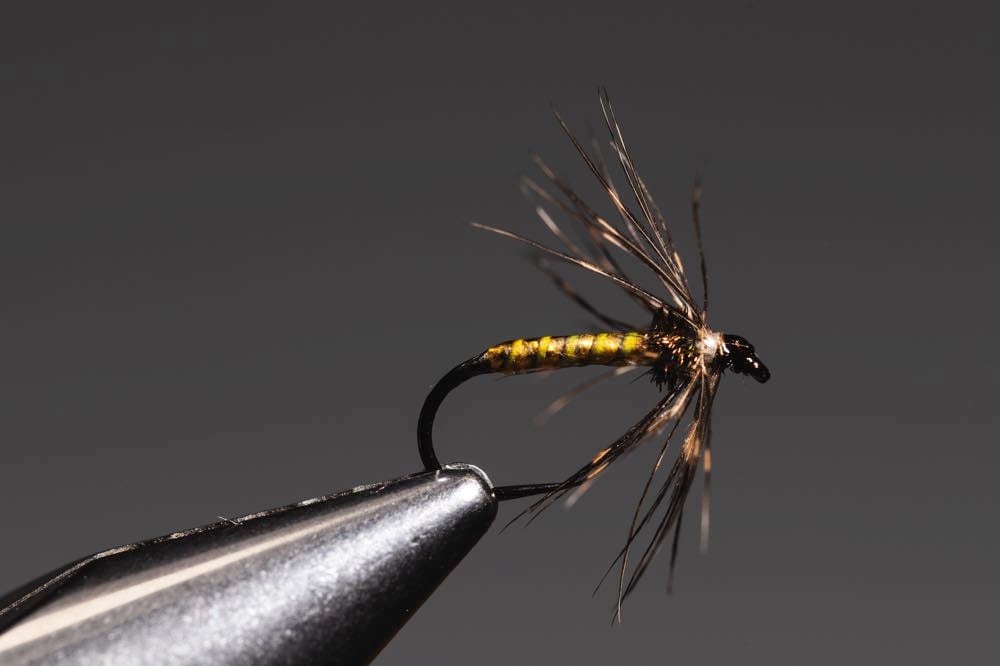 The fly can be tied to imitate a myriad of different subsurface lifeforms. From sunken spiders (the fly is also referred to as a Spider) to nymphs.

How to Fish a Soft Hackle?

The Soft Hackle fly is very versatile when it comes to fishing techniques. It can be used as a single fly or, even better, fish two or three Soft Hackles at once. It’s also an excellent fly to use behind a dry fly in a dry and dropper rig.

In a river, the fly can be cast upstream and allowed to dead drift, cast across and allowed to swing, and stripped through big pools. You can even use it in a nymphing rig.

On lakes and still waters, the fly can be used with great success in tandem with Buzzers (see our post on How to Tie a Buzzer).

Open up your fly tying kit. You will need the following materials to tie a Soft Hackle:

The Soft Hackle is best tied on a standard-length straight shank hook. You can play around with the gauge of wire that is used. 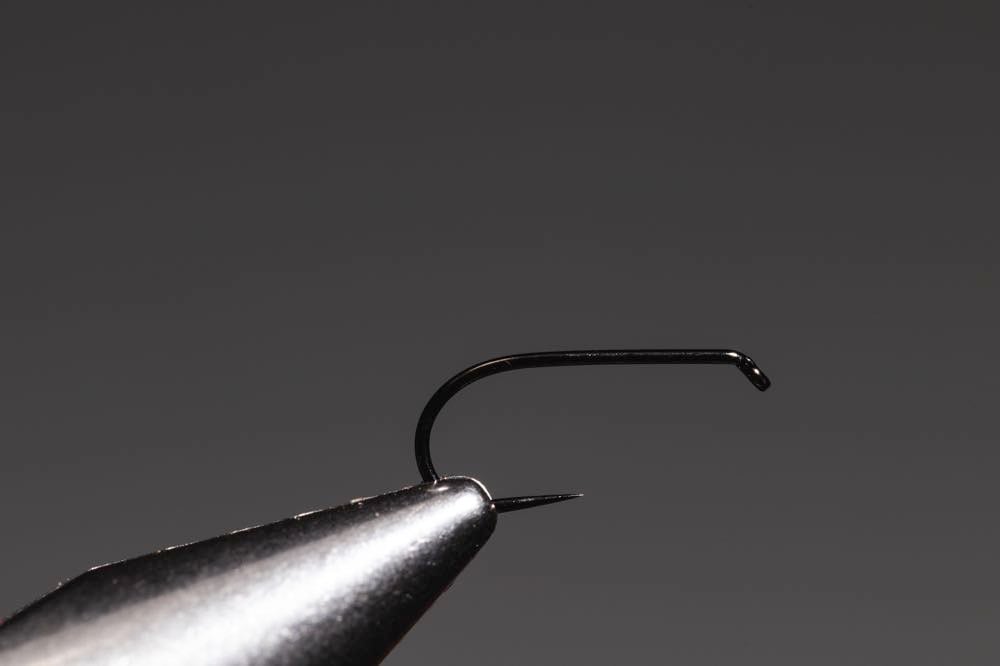 If you are targeting larger fish, use hooks that are dedicated to wet flies (thus having a thicker wire). If you are mainly tying flies to be used on small fish, a thin dry fly hook can be used.

The abdomen of the fly is to be kept as thin as possible which will give the fly the correct profile. For this reason, a flat-lying thread is crucial. 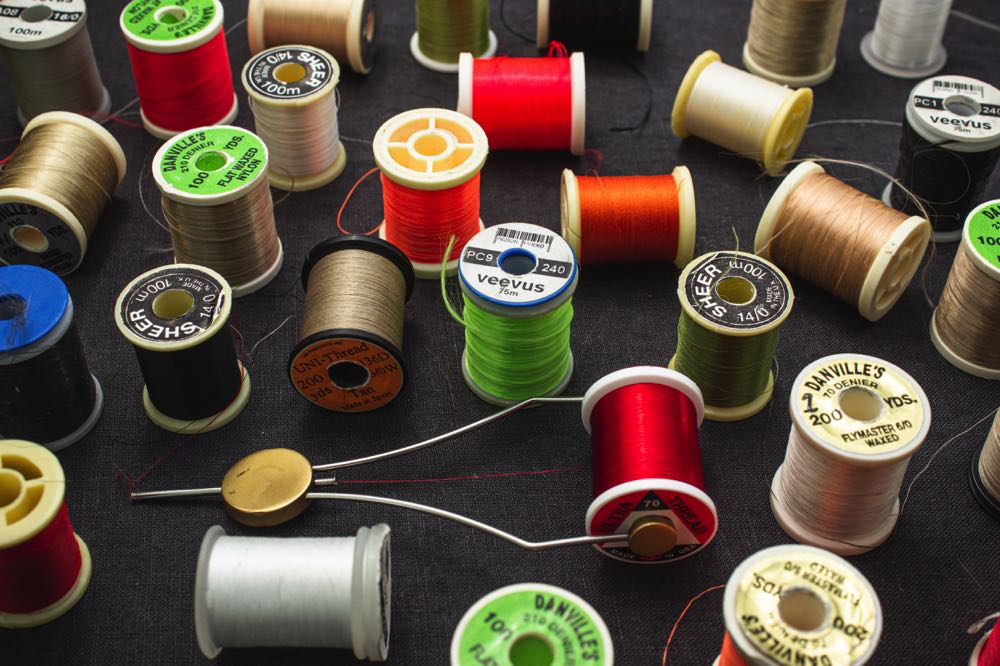 Choose a color to suit the overall color of the fly. I mainly use white thread which can be colored with a permanent marker when finishing the fly.

The thread that I recommend for the Soft Hackle include:

Traditionally, the abdomen of the fly was made with Silk floss. Although this material still makes for an excellent choice, these days there are hundreds of different materials you can use. The most important factor is that it lays flat. 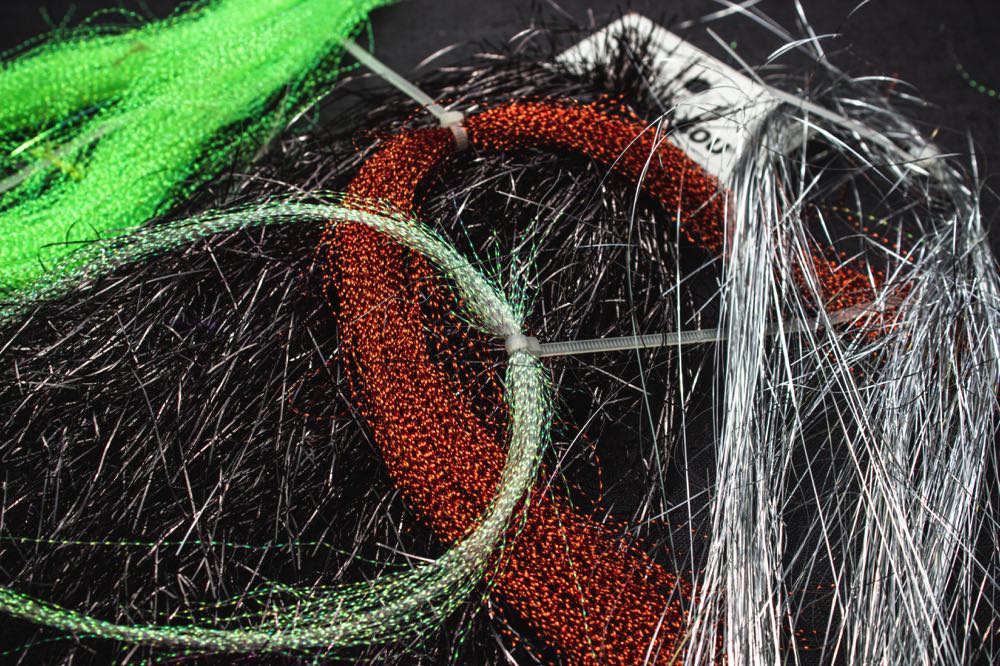 From there on you can customize the fly with any material you would like to use. Some of my favorite materials include:

The thorax is optional. I tie one only on larger soft hackle variants. It can be used to add a hotspot on the fly or enhance the profile of the nymph. Some material types that work well are:

From the name of the fly (Soft Hackle), you’ll be able to establish that the hackle needs to be soft. The soft fibers of the hackle move in the water which gives the fly such a natural look. Any feather with soft fibers and a thin flexible stem may be used. 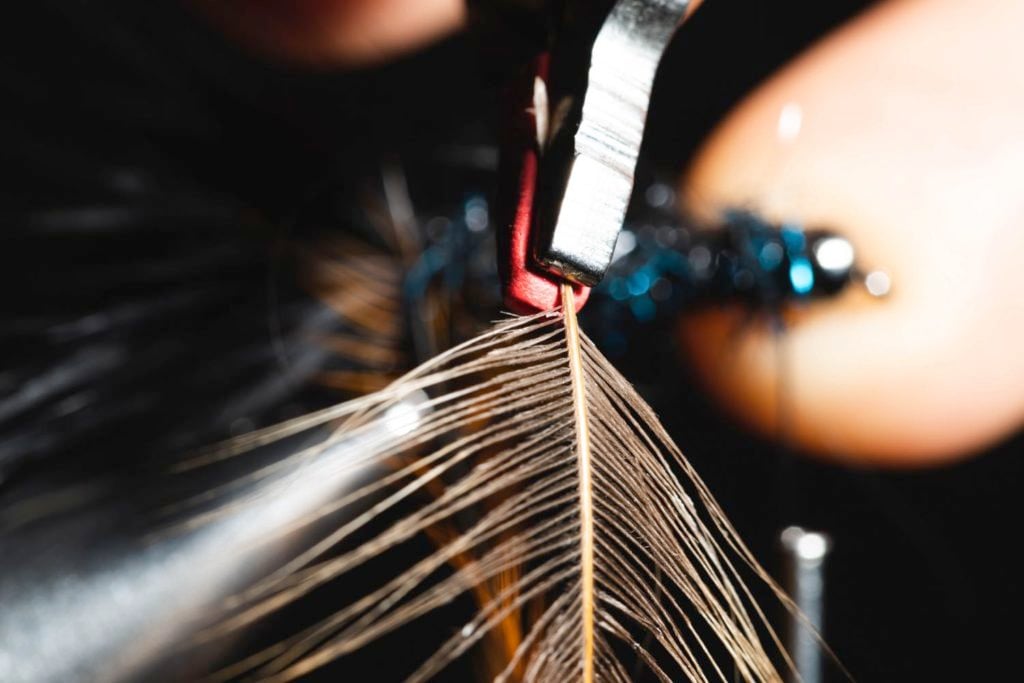 Some of my favorite materials for this purpose are:

The head of the fly is sealed after the fly is whip finished. My favorite head cement includes Loon Outdoors Head cement or Sally Hansen’s Hard as Nails. 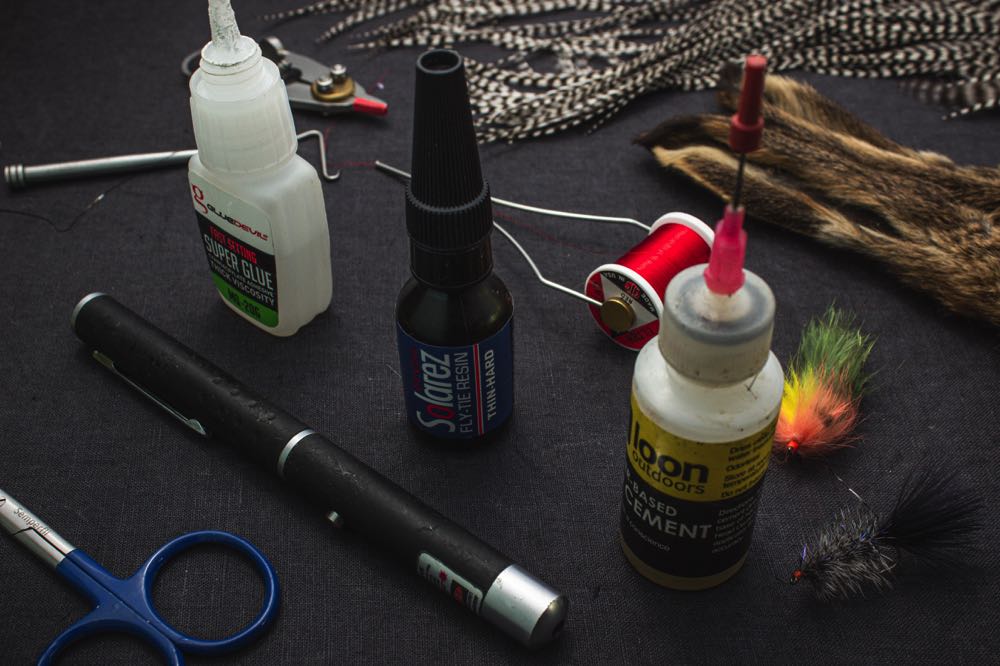 You’ll need the following tools to tie a Soft Hackle:

How To Tie a Soft Hackle

Below, we go through the steps of how to tie a Soft Hackle fly. By no means is this the only way to tie them. This specific pattern has proved to be successful in my fishing endeavors, but please feel free to experiment with material types and colors. The specific materials I am using are listed in the recipe below.

Step 1: Secure The Hook in The Vise 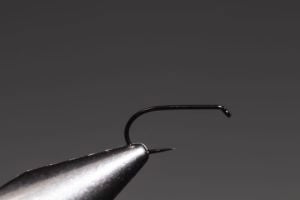 Select a hook from the packet and place the bend between the jaws of the vise. The hook shank should be level and the hook point and barb exposed.

Lock the hook in place. Double-check that the hook is secured properly to prevent it from moving about when you’re tying.

Step 2: Attach The Thread To The Hook 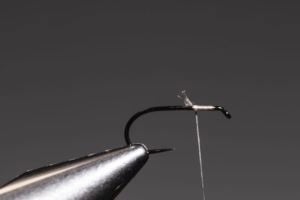 Hold the tip of the thread between the thumb and index finger of your left hand. Place the thread with the bobbin over the hook and wrap 5 or 6 times.

Then, run the thread over itself to lock it in place. Cut off the excess tag end with a sharp scissor. 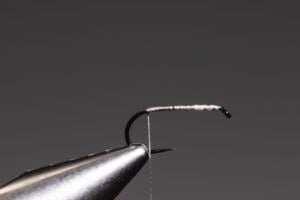 Step 4: Tie In The Peacock Quill 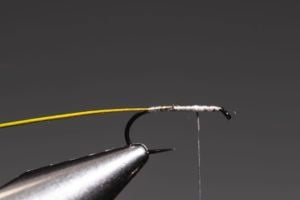 Tie the peacock quill in on the thin side. The quill will be used as ribbing and we want to start the ribbing from narrow and work our way forward as it gets wider.

Once tied in, cut off the excess. Wrap the thread 2/3 of the hook shank forward.

Step 5: Tie In The Tinsel 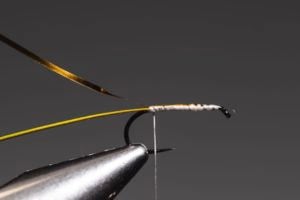 Tie the tip of the tinsel in where you left the thread. Then wrap the thread backward while securing the tinsel.

Stop at the end of the thread base where you tied the peacock quill in. Run the thread ¾ of the shank forward. 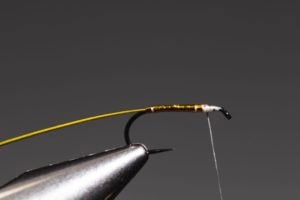 Tie off when you reach the position of the thread and cut off the excess. 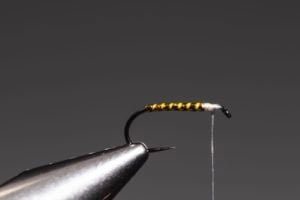 The peacock quill is to be wrapped in the same direction as the thread. Wrap the quill forward leaving segments of the underlying tinsel exposed.

The quill is being used as a ribbing. Tie off once you reach the thread and cut off the excess.

Step 8: Tie a Half Hitch 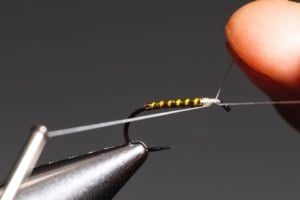 Do a half hitch with the thread around the shank. This will secure the thread and prevent anything funny from happening when we seal the body.

If you have a bobbin holder on your shank, place the thread over it. 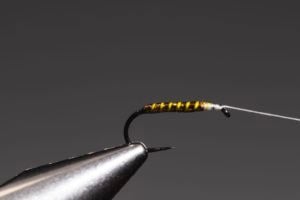 Seal the body with a coat of UV resin. The first coat needs to be thin and can be evenly distributed with a bodkin.

Seal the UV resin with a UV torch. After it has dried, seal again, this time with Hard as Nails. Rotate the fly to allow the resin to dry.

Step 10: Tie In The Peacock Herl 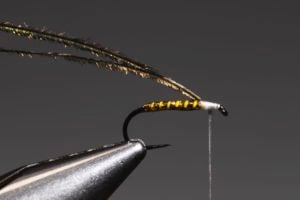 Select one or two, depending on the size of the fly, well colored peacock herl fibers. Cut the tips to align and secure where you stopped the body. Cut off the excess. 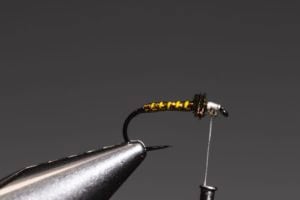 Make a single wrap of peacock herl slightly behind the point where you tied it in. This will cover up and gaps between the abdomen and thorax.

Then wrap it forward twice. Secure with thread and cut off the excess. 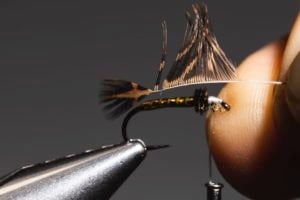 Select a suitably sized feather from the bird’s skin. Pull off any fluffy fibers from the base. With the well colored side facing towards you, remove the fibers on the left-hand side of the feather.

Then, stroke the remaining fibers back so they are perpendicular to the stem. 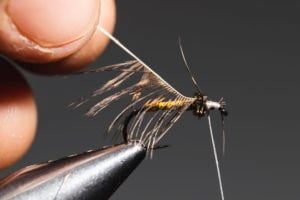 Tie in the tip of the hackle with the thread. Cut off any excess and cover with thread.

Attach a hackle plier to the base of the feather’s stem. 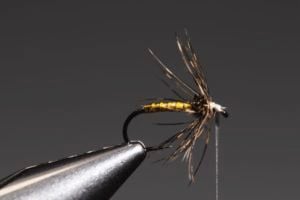 Palmer the hackle, in the same direction than the thread, forward. After every turn, make sure that no fibers are trapped.

Secure the hackle once you have created enough legs. Cut off the excess very carefully. 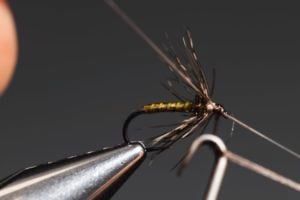 Color the white thread with a permanent marker and build a neat head for the fly. Whip finish and pull the knot tight. Cut off the thread.

Make sure to check out our guide on how to do a whip finish if you need to learn, or if you just need a quick refresher. 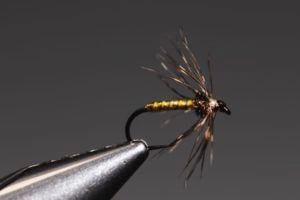 Apply a drop of head cement or nail varnish to the head. Distribute it around the hook with a bodkin.

Ensure that the eye of the hook is clear of varnish by passing a thin piece of wire through it. Allow the resin to dry. 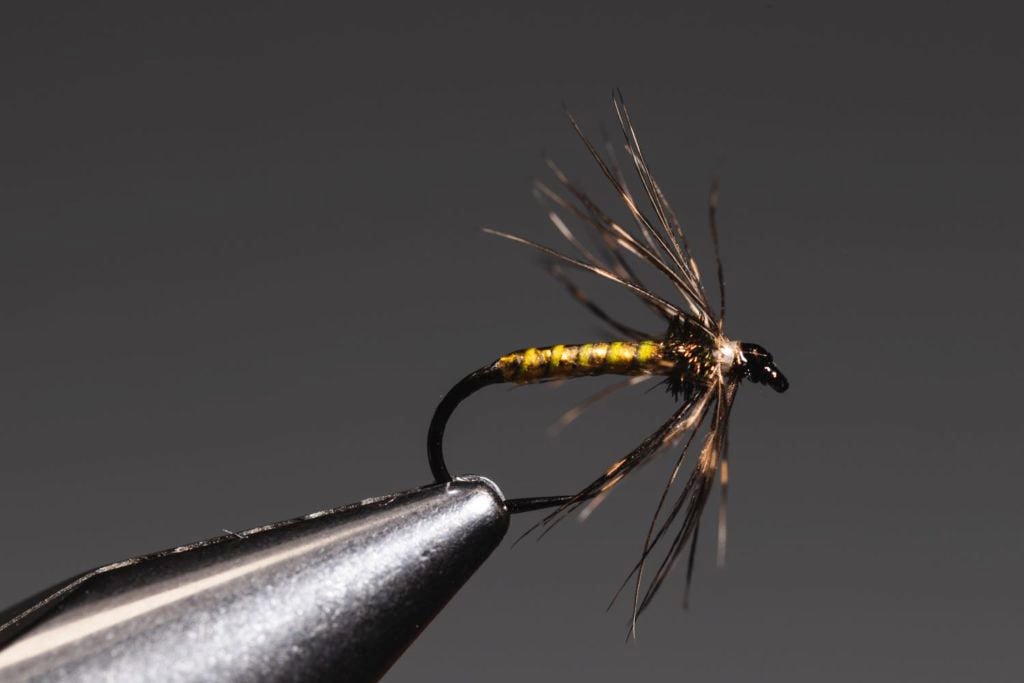 Now You Know How To Tie a Soft Hackle

It might seem ridiculous that a fly this simple has been around for so long and continuous to catch fish. I urge you to tie a couple before your next trout fishing trip. Tie them on your rig and give them a swing or drift and you’ll be amazed how effective this fly is.

If you have any questions regarding the Soft Hackle or comments about the article, please leave them at the bottom of the page.