Skip to content
Home , Flies , 10 Best Pike Flies: Effective Patterns & When To Use Them

10 Best Pike Flies: Effective Patterns & When To Use Them

Don't leave for your next pike fishing trip before tying or packing these flies. This is a list of the best pike flies every pike angler needs.

It’s strange how nowadays we seem to have ‘discovered’ fly fishing for other species. When I started fly fishing nearly fifty years ago pike were treated purely as coarse fish.

They were stalked using live or dead bait or by spinning. And yet folks were obviously catching pike using flies and lures – by mistake perhaps, but still catching. It was unheard of to actually go out looking for pike with a fly rod set up.

Pike fishing with flies, streamers and lures is mainstream stuff nowadays. And there are some skilled pike hunters to compare with bluewater predator fishers. Pike fishing is the equivalent of ‘big game’ hunting – potentially in your backyard.

Obviously you need some kit to withstand a bigger fish than the typical brook trout but most fly fishers will have nearly everything in their existing arsenal except perhaps fine wire traces and the appropriate lures to attach to them. If you are ready for adventure then let’s find out what makes the best pike flies.

What is a Pike Fly?

Pike are predators – whether smaller ‘jacks’ or the mature pike running well into double pound weight figures. The food source is going to represent a proper meal and not the size 16 or 18 flies or nymphs on which most trout graze. 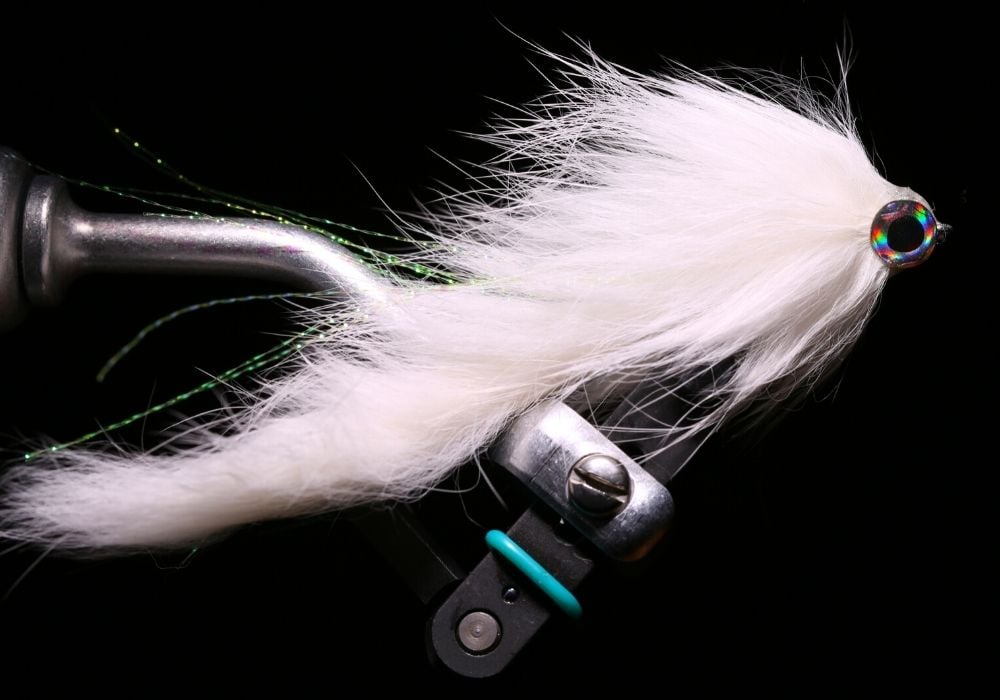 So although it may be tied with fur or feathers a pike fly is a lure and does not represent any ‘fly’ life. Most pike food (and lure imitations) will represent their main food – fish fry but could include small mammals or anything else in their diet.

What Makes a Great Pike Fly?

Simplicity is often the key – especially with pike flies – you do not want to invest a lot of time or expense in a lure which may last only one or two fish. Have you seen those teeth? So we are looking often at simple and robust patterns which need to be effective too. Applying our standard of ‘AIA’ factors below let’s see what we need for an effective pike fly.

This is a ‘must’ for great pike fly patterns. The pike is a hunter and will be turned on by movement. Mobile tying materials will allow the sense of movement needed.

The lure must look like something to eat – at least a passing resemblance to fish fry or a mouse, frog or the like.

There might be a number of attractor triggers – red-painted gills suggesting a wounded fish (easy prey), possibly sound from a large fly making ripples rather like a popper for bass or panfish. 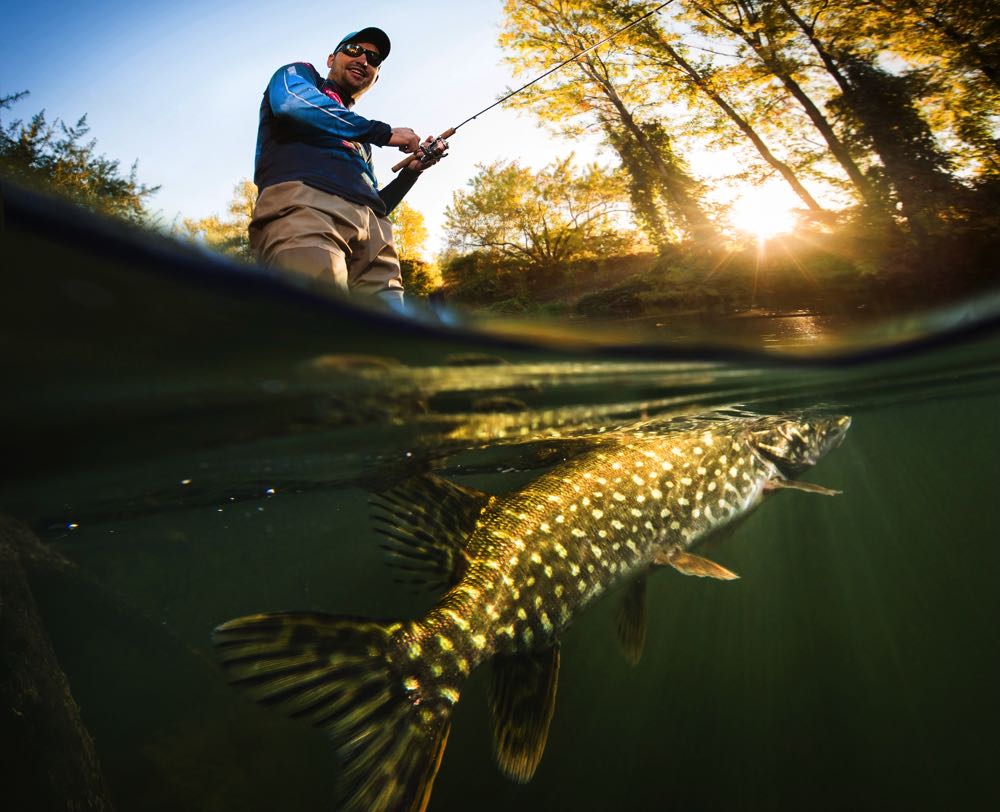 Instead of ‘attraction’, the fly may also be geared to trigger an aggressive reaction too – noisy poppers or lures might be high on the list as an effective pike pattern in this respect.

What Do Pike Flies Imitate?

There is no matching the hatch here – and as noted above pike flies are not flies but representations of other food – fish fry patterns are the most common but other food sources can be represented as fly tying too – mice and frogs are likely to be the main other lures.

The majority of pike flies will be hairwing or rabbit fur streamer styles of lure. But the list includes poppers and mice or frogs which could be dressed in foam, plastic or deer/elk hair. Pike will also take plugs or spinners though these are not flies and need to be fished with a different rod – most fly rods will not cast the weights of these heavier lure patterns.

When considering the most effective patterns for pike fishing I thought it sensible to cover a range of options to create a capsule top ten list of some of the best pike fly patterns:

A. As straightforward fish or fry imitations.

B. As lures with an attractor or stimulator role. These may promote an aggressive, gnashing take response from a pike).

C. Lastly to look at forms of food other than just fish fry.

Picking up these criteria let’s see which top pike flies you should consider for your fly wallet or tackle bag. Many of these patterns will double up for bass, especially the topwater designs. 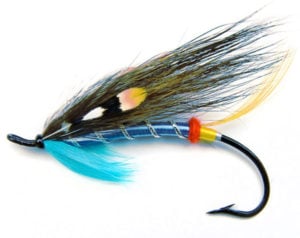 These are generally imitators with ‘action’ as the hairwing is very mobile in the current and adds life to the fly.

The perch with a 4/0 or 6/0 hook would probably be my first offering to a pike. There are many fairly similar variations on the hairwing theme and most have a brown hair top wing and white underwing or belly. Again most of the effective flies have some sort of eyes – either stick on googly eyes, dumbells or bead chain – sometimes just a dab or two of paint on each side.

Another hairwing imitative pattern but this time dressed to fish hook point up. The Clouser Minnow is very useful if you are fishing a weedy lie with a pike lurking under cover and you need to avoid hooking up in the weed instead of the pikes mouth.

As a general style these are good for most large predator fish and salmon too. Tube flies allow for quick changes of pattern, especially if you use metal clips and rings at the transition from the wire trace to the main line.

Any of the main styles can be translated to a tube pattern. These can be slightly fettled and adjusted to help prevent tangles onto the hook. Try a ‘wiggle tail’ as a specialist pike pattern.

An attractor category. Dressed with a rabbit strip and foam head these are a top water pattern to create a noise and either attract or annoy the pike into a ‘take’ reaction.

See More: How To Tie a Gurgler

Again an attractor. These Poppers and Bangers have round cylindrical heads and a hair or feather tail to create a disturbance in the water. Similar in concept but constructed quite differently to Gurglers.

As the name suggests these are tied from strips of rabbit fur. The basic bunny tails can also be dressed with multiple strips of brightly coloured rabbit fur, and all sorts of sparkle and tinsel added as an attractor ingredient to get the lure noticed.

The pattern is essentially an attractor and with a bit of ‘imitation’ due to the highly animated movement in the water.

The Black Zonker is also a variation on the bunny tail theme but with a bigger rounder body – this could be important where the fly is viewed by the pike from below and the rounded silhouette suggests ‘fish’ rather than ‘lure’ and therefore is an important top water pattern or when retrieved to pull it up to the upper part of the water column.

The Foam Frog is probably a much more cost effective offering than an expensive deer hair dressing and offers a top water profile to tempt the pike. You need at least one in your fly wallet ‘just in case.’

9. Foam Mouse Such as ‘Rainy’s or Similar

Foam Mouse is another imitator – not a pattern to use all day everyday but again you need one or two to ring the changes or for when all else has failed and the usual suspects have not managed to obtain a bite.

Although essentially a hairwing the Mohican offers a much ‘taller’ side profile. It also achieves movement and life like action created by the hair/fur dressing. The zonker might offer a better fish shaped profile from below; the mohican perhaps looks bulkier viewed sideways on and might offer a better prospect if fished at the pikes eye level Often in lurid colours this may also offer an element of provocation to a pike as an effective pike catching pattern and an attractor/provoker.

There you have my top ten best pike fly patterns. This range of patterns will address a broad number of fishing situations. It includes patterns suitable for heavily weed-grown lies, topwater and mid-water column fishing.

Many of these pike flies will double up for other predator fish. If you have a selection of these key lures in your fishing bag you will be equipped to stalk a wide range of predator species. Remember though you will need to have a range of hook sizes as a large pike fly may be oversize of bass fishing unless you are after the monster-sized fish.