Don’t head out to fish for Rainbow Trout without reading this article. It’s a detailed description that will set you up for success.

Rainbow Trout have worked themselves into many anglers Mount Rushmore of fish to catch. They’re beautiful and extremely aggressive. As far as freshwater fish are concerned, Rainbow Trout gain your respect because they’re some of the toughest fighting fish you can find. Once you’ve hooked into the fish, you’re in for a treat, but the initial catch isn’t always easy.

I had my first experience landing rainbow trout in northern Minnesota in the streams running into Lake Superior. These fish quickly grabbed my attention. I had been catching browns the entire morning, but as soon as I hooked into a rainbow, I knew it was something different. On top of their toughness, these fish are beautiful. No single fish is the same!

What is a Rainbow Trout Fly?

Rainbow trout eat many of the flies that the rest of the trout family would eat. They feed in all parts of the water column and have a tendency to try and feast on some of the larger prey in the water. 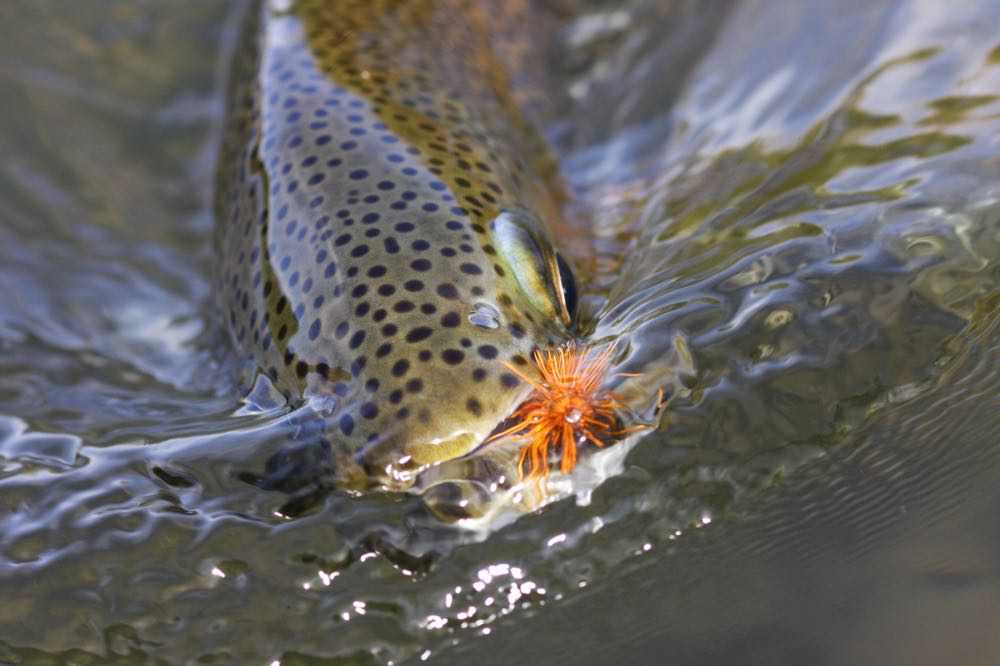 They’re fast growing fish so be sure to do your part and try to keep up!

Rainbow trout eat flies at all stages of the life cycle. Depending on where they’re looking for food, they’re willing to eat whatever insect is near regardless of where it is in the growth process. Most insects have four stages they go through on the way to becoming an adult.

The larva of an insect is the earliest stage. At this point, they’re growing within a small casing. Larva of insects sit on the bottom of the river or stream as they prepare to enter the pupa/nymph stage. In the fly fishing world, larva are considered egg flies.

The second stage of an insect’s life is the nymph or pupa stage. At this point, the flies are beginning to break out of their casing and start feeding on the nutrients around them. Insects can stay in this stage for upwards of two years. They attach themselves to rocks or other surfaces at the bottom of the water.

Fish love to eat insects in the pupa stage. They’re a bit larger and offer more energy to the fish once they’re consumed.

The emerging stage of an insect is sometimes the most difficult to time. Since this is the shortest stage of the insect’s life, you really only have a few hours each day that you can use emerging patterns. When flies are emerging, they’re starting to shed their casings and move to the top of the water column.

When the emerging stage begins, fish start looking to feed towards the surface. They pick the flies off as they drift upwards in the water column. These are extremely easy targets and fish like to get their fill on emerger flies if at all possible.

The adult stage of an insect can last one day to a couple weeks. It’s not a very long portion of an insect’s life. The insects sit on the surface of the water as its wings dry and as soon as they feel completely dry, they take off and find a place to mate.

Females sometimes land on the water to lay their eggs and that’s when fish scoop them up for a free meal. As soon as a male is fully developed and dry, they take off in an effort to find a fly that they can make with. When you see fish rising, you know they’re feasting on adult flies.

Again, Rainbow trout will eat many of the insects and prey that other trout would eat. They can be picky eaters, but as long as the fly you choose is somewhat close to what they are currently feeding on, you’ll have plenty of success landing these fish. 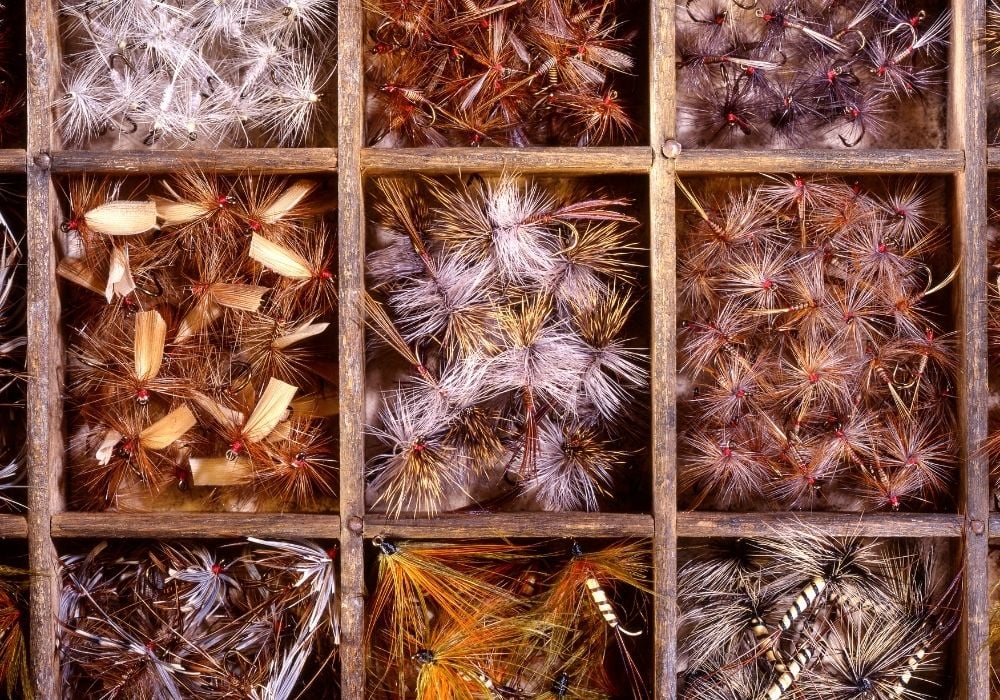 Remember, if you throw a perfect imitation of a fly, but can’t present it well, you’re going to struggle to hook into fish. Presentation is just as important as an accurate fly pattern.

Wet flies are flies created to sit under the surface of the water. These can be imitations of baitfish, hatching insects or any other type of living thing in the water!

Nymph flies are imitations of insects that are hatching and nearing the adult stage of life. These are tied to sit near the bottom of the water column to be a representation of an insect in the pupa stage of its life.

Streamer flies are the largest flies you will have in your box. They can be imitations of baitfish, crayfish, leeches and an assortment of other large prey. These flies are used when you’re interested in hooking into some of the largest fish of your life.

As soon as you start to see fish, tie on a dry fly. Rainbow trout love to feed in the midst of a hatch so make sure you’re ready for them!

The Parachute Adams is a generic dry fly that can imitate any sort of insect with wings. If there are Caddisflies, Mayflies or any other types of flies hatching, you’ll be safe throwing the Parachute Adams. You can find these in sizes 16-20. Make sure you’re using lighter tippets when throwing these flies! You don’t want to be seen by the fish.

The best options for tippet would be a 4 or 5x. Also, make sure that you use a 9 foot leader as well. You don’t do this dry fly to be seen anywhere near your fly line. While it will take some extra control, it’ll pay off in the long run.

The Elk Hair Caddis is a must for any one targeting rainbow trout. These are spectacular flies to use in the midst of a Caddisfly hatch. One of the best aspects of this fly is that it sits high on the surface of the water. Make sure you equip this fly with plenty of floatant. It’ll last you the entire day.

Use 4 or 5x tippet with 3x leader. This will be strong enough to withstand any of the trout you’ll land that have some size!

The Chernobyl Ant is a spectacular fly to use when you’re targeting rainbow trout. Use these late in the season on some of those colder tailwaters out west.

They can also act as a great option for the dry fly on your dry-dropper rig. They’re long, can withstand quite a bit of weight and will provide you with dozens of fish.

When you’re throwing emerger patterns, make sure that you’re timing it properly with the hatch. You don’t have long to throw these flies because fish will quickly turn their attention to feeding under the surface to only feeding on the surface.

If you’re fishing a Mayfly bite, please use the RS2 emerger. This fly is a spectacular option to use late in the fall or early in the spring when the BWO’s are hatching.

They’re small and will sit just a few inches below the surface of the water. It’s a spectacular pattern.

The Sparkle Pupa is a great option if you’re fishing a Caddisfly hatch. These will pop up just below the surface and if you would like, you can throw some floatant on it and the wings will stick out just like an emerging Caddis.

The Klilnkhammer will always be my favorite Mayfly emerger. It’s bright and obnoxious. It works just as well as an attractor fly as it does as an emerger. If you’re wondering how aggressive the fish are, tie on this pattern and you’ll quickly find out.

Nymph patterns are always going to work when you’re targeting rainbows. They’ll work at all points in the year!

If you’re targeting rainbows in tailwaters, go ahead and use the Pheasant Tail Nymph. It’s a great Mayfly representation and the brass beadhead will get you to the bottom of the water column.

The Prince Nymph is a bit brighter and flashier than the Pheasant Tail, but just as effective. You’ll find that this works when you’re fishing pocket water or any type of area where the fish are sitting a bit deeper.

The Gold Ribbed Hare’s Ear is one of the most versatile nymphs on the market. It can fill whatever role you would like it to fill regardless of what insect you are fishing. No matter the species of fish or the insect, this pattern is going to work wonders for you.

The Wooly Bugger is going to catch you rainbow trout. You have the freedom to drift it or swing it. Regardless of what method you choose, you’re guaranteed to land some spectacular fish when you throw this fly.

Mouse streamers are some great patterns to throw. The Morrish Mouse has quite a bit of material and actually offers a great representation of smaller rodents. Mousing for rainbow trout is some of the most fun you can possibly have!

The dumbbell eye Clouser Minnow is another solid pattern proven to land rainbow trout. They’re large, flashy and frustrate those bigger fish that are sitting in pools or cruising through the seams.

Rainbow trout fishing is something every fly angler needs to try. The rainbow trout population is steadily growing across the United States and the fish continue to get bigger and bigger. Make sure your next fishing excursion includes an opportunity to land these amazing fish. 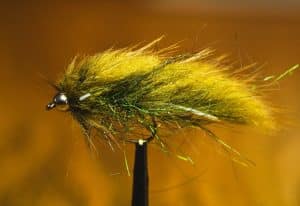 An expert angler for years shares his best stillwater trout flies & most productive trout patterns in this epic guide, including streamers, nymphs, and more. 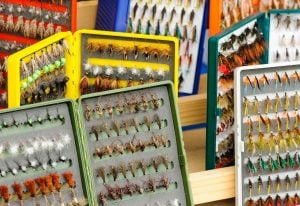 This article covers the differences and similarities between a dry fly vs wet fly, including how they are tied and presentation. 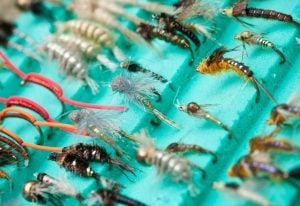