10 Best Bass Poppers: Effective Patterns & When To Fish Them

Poppers have been around for a hundred years or so, though lurid almost psychedelic modern  foam poppers are one of the more modern and creative aspects of fly fishing and lure fishing. Enabled by modern plastics and foam materials, a generation of experimentors have evolved a range of modern fish catchers. Rather different from the ...

Poppers have been around for a hundred years or so, though lurid almost psychedelic modern  foam poppers are one of the more modern and creative aspects of fly fishing and lure fishing. Enabled by modern plastics and foam materials, a generation of experimentors have evolved a range of modern fish catchers.

Rather different from the old wooden carved plugs and lures of yesteryear. You can venture a foam popper at a bass in an awkward lie where you would not dream of casting an expensive plug or traditional lure!

This post looks at some of the best bass poppers available to give you confidence in fishing a variety of situations.

When I started fishing (a few decades ago…) we had never even seen such things as poppers in the UK (well I hadn’t anyway!) but these lures are part of the armory and if you are chasing bass you need to know how to use them to provide a full range of choices.

If you are reading this in North America then chances are you will be freshwater fishing for bass, and if reading in Europe then you will be likely chasing sea bass. Though the two bass species are very different the odd thing is you can, with a few exceptions, catch both on poppers!

What is a Popper?

The name reflects the job these lures perform. Poppers have a cavity formed in the head of the lure. As they are retrieved the air in the cavity ‘pops’ and acts as an attractor to the fish. There are two main types of popper. Chuggers ‘pop’ and ‘spitters’ have a different head cavity and flick water when retrieved – they look similar but behave differently.

Poppers are fished as a ‘top water’ lure – they float. 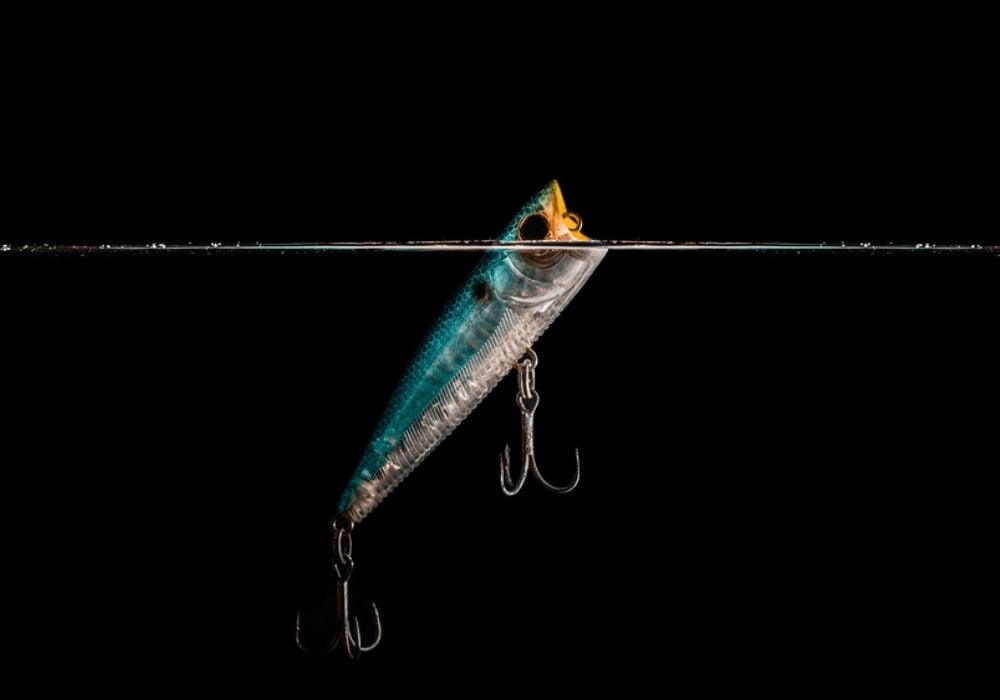 If you are just getting into bass fishing poppers are a good way to start (and catch fish) before exploring other more ‘technical’ angling disciplines.  Or you may be content to simply enjoy popper fishing as an accessible and fun form of catching bass (and other predator fish too including pike and trout, and panfish.

What Makes A Great Popper Lure or ‘Fly’ ?

Poppers are sometimes close copies of fish fry but often are brightly painted or colored foam. Many traditional flies rely more or less on life like imitation or impressions of fish food. Poppers instead focus more on colour or sound to attract prey.

These are usually cast out, left for a few seconds then retrieved in a series of jerks. As with many lure patterns you will often find the movement triggers the bass (or trout or other predator) response for a smash and grab take.

The usual ‘A.I.A.’ criteria we have used in these posts still apply though. Read on:

This is a biggy for poppers which may wriggle when retrieved. The head cavity may add to an irregular ‘swim pattern’ for the lure stimulating the fishes curiosity.

As noted above the imitation factor with poppers is usually less specific and more general though there are plenty of fish fry imitation poppers too. The popper is frequently acting as a general item of fish food and usually fished on or near the surface. 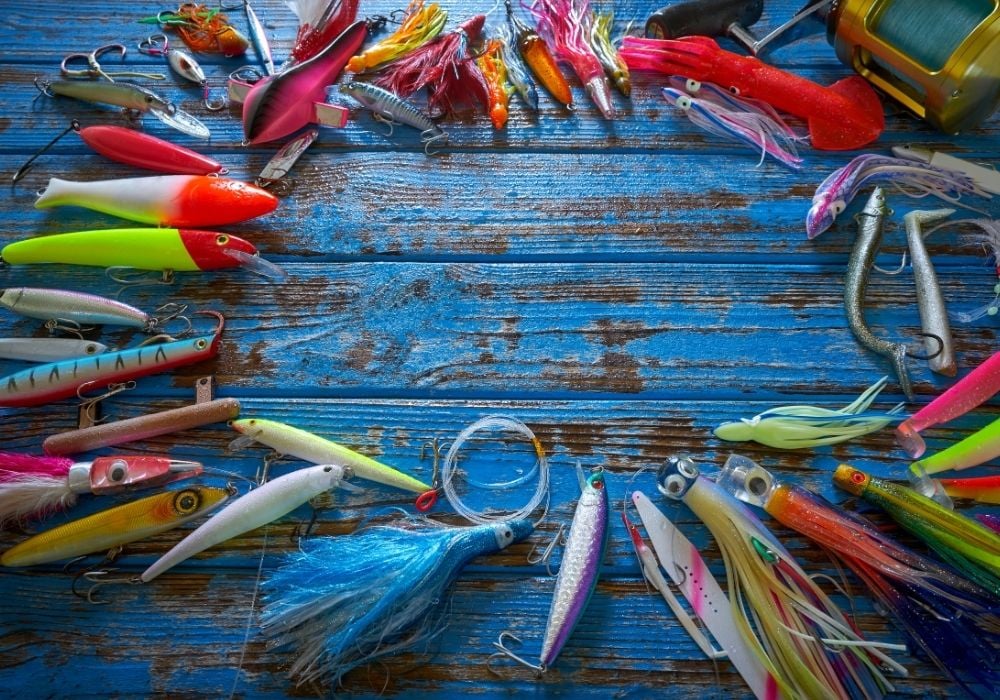 The other key element for a popper is attraction – bright colours and noise coupled with the ‘action’ component are the main ‘eat me now’ triggers.

So, having looked at the key ingredients for a successful bass popper let’s look at some long standing and more recent bass – catchers which tick these boxes. Effective bass poppers you should have in your tackle bag before venturing out in search of fish critters. 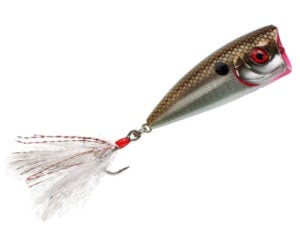 I had to start with the Hula Poppa Chugger! This is one of the older popper patterns and it has the lot; a proper popper mouth (say that one quickly after a couple of drinks) which creates sound and porpoising swim effects, colour, and a swishy skirt (the Hula bit) to add movement and attraction. This is an established top bass pattern and top water lure. 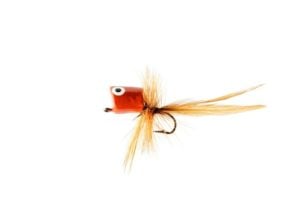 The red and white bass popper pattern is a particularly garish concoction with a feather tail like a streamer to provide plenty of movement. I suspect the bright red coloration may send a signal that the popper may be wounded and therefore easy prey. This pattern should also connect you with trout or other predator fish where the local or club rules permit it to be fished for them.

Real fish poppers are great. Many poppers are patterned to represent small fish fry with silver bodies and scale patterns – this is probably the closest poppers get on the imitation (fish) scale. (I couldn’t resist the pun). Something like the Lucky Craft s8 popper is typical of a range of fish like representations, again the red mouth is a common trait to the pattern.

Another Fulling Mill pattern – I have an affection for Bluegill Black Popper patterns – whether flies, streamers or whatever. In coloured water they can show up very effectively and better than some of the bright yellow or orange designs. Obviously as the name suggests this will take blue gill, but good for anything bass like hiding in the weed.

You need at least one of these Frog Poppers if bass fishing in North America (somehow it won’t do so well if fishing for European sea bass). These will usually have a wide body, larger mouth, and create quite a noise and some wake. There are several commercial patterns to choose from. If it’s on the menu for bass you need to be able to ring the changes. If the fish aren’t taking the more conventional patterns, then a large frog meal has to be worth offering. 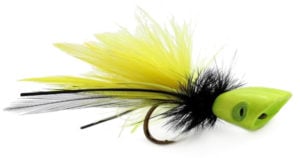 This is perhaps now thought of as the archetypal popper pattern. There are so many variations on the form that it is almost pointless naming them – you can stock up on a range of colours and patterns and these are relatively cheap when compared with some of the more classic sculpted types such as the Hula.

If fishing under trees or a weedy lie you can afford to take a chance of losing one on snags. I reckon a good fish is always worth venturing a cheap lure for. If you are really keen you can even make your own foam poppers. Special punches can be made or purchased to chop out the foam pellets used to make up the bodies. (If you make your own lures or flies you can feel more courageous about trying for difficult fish and losing the occasional fly or lure in the process).

I am not sure if the Foam Mouse Flies qualify as a popper or not! But foam mice such as those by Rainy’s fulfill many of the criteria for bass poppers, that can be fished with a jerky retrieve, they splash and ripple on the water, and they are quicker and cheaper to set up than deer hair mice.

If you want to read about how mice can catch big fish read the last chapter of Bob Wyatt’s book ‘What Trout Want.’ These are a significant form of food for large trout, bass and other predator species. Not all the time certainly. But if you have one or two of these in your fly box you should have covered all possibilities and I have included them as an effective ‘top bass popper’.

I have chucked boxed selection sets into the mix – I discussed above the possibility of fishing into hard to cast to corners or weedy lies and these are the patterns to try out. If you lose one or two it isn’t the end of the world. The Tigo fly variant could even be dressed up quite easily with some marabou or feather to add mobility and act as the basis of a simple fly tying ‘variations on a them’.

Have a look at options of 12 boxed yellow plastic poppers – a very simple construction – or packs of 10 poppers in a bass and pan fish pack. Some of these sets are not as ‘posh’ as the more classic offerings but a mix of both allows you to cover all the bases.

I like the Rapala Skitterpops! The front end lip of the popper (or mouth if you prefer) is formed rather like the diving planes on a submarine and spoil the aerodynamics of the fish. (I suppose that should be aquadynamics). This causes the lure to duck and dive in the water hyping up the attractor element when retrieved. It does all the spitting and popping stuff too.

There is a rather childlike fascination in casting these out, retrieving them, watching them wriggle and kink in the water,  and waiting for the bang as a fish smashes onto the end of the line.

The Creek Chubb Knuckle Head Popper is a combination of the old style articulated plugs but retains the popper head. The articulated body provides added wiggle and I have to say the styling of the whole thing has quite a sculptural quality about it.

I’m not sure if the design is intended to catch anglers, but luckily it is renowned as one of the best bass and predator fish poppers too. The design is classic in the sense it reflects long established lure principles, but updates them.

There you have it; a range of top water lures for bass including patterns which include fish fry, terrestrials and frogs. And they catch predator species and trout too. This is a fun way of fishing for bass and the colored foam poppers are the most extrovert form of lure fishing.

The cheaper boxed sets are the sort of thing you can leave in the runk of the car with an old rod for one of those days when you sneak to the creek or river for a quick fish before returning home from work or whilst on the road. (I have heard of people who do such things. apparently angling is addictive!).

For days when the mood takes you or when fishing a real feather fly isn’t working then the popper provides a completely different way of fooling the fish. One of these patterns should do it.